“The Mote In God’s Eye”; by Larry Niven and Jerry Pournelle. Miscellaneous thoughts and musings. 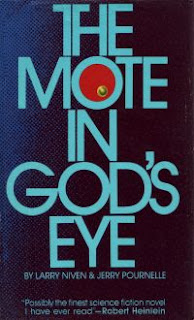 It’s been quite some time since I have read a lot of science fiction. I was rather dedicated to the genre back in my college and pre-college days. However, as an engineer and sometimes scientist, I would find I would get very critical of the scientific aspects of the book and let that diminish my feelings about the story. I also thought a lot of the stuff I was reading was really quite juvenile. Anyway, I don’t read much sci-fi anymore.

One novel that I did read was “The Mote in God’s Eye”, and it made quite an impression. As a science fiction, mankind far-flung in space, story, it was pretty good. The writing was done well. The character development was a bit lacking, if I remember correctly, but hey, it’s sci-fi!

But what was the most striking about this novel was the analogy about ourselves it was making. Here is some information from Wiki entry for this book, for those who haven’t read it. Click the link if you want more information. Alternatively, you could just go buy it. I'm sure there are used copies at Amazon or on e-bay.

The Mote in God's Eye, by Larry Niven and Jerry Pournelle, is a science fiction novel that was first published in 1974. The story is set in the distant future of Pournelle's CoDominium universe, and charts the first contact between Mankind and an alien species. The title of the novel is a wordplay on Luke 6:41.

The book describes a complex alien civilization, the Moties. The Moties are radically different (both physically and psychologically) from humanity in ways that become clearer over the course of the book. The human characters range from the typical hero-type in Captain Roderick Blaine to the much more ambiguous merchant prince and suspected traitor Horace Bury. Robert A. Heinlein, who gave the authors extensive, detailed advice on the novel, blurbed the story as "possibly the finest science fiction novel I have ever read".

The Moties are sequential hermaphrodites, changing sex over and over again over the course of their lives — with one quirk: if a Motie remains female for too long without becoming pregnant, the hormone imbalance will kill her. This ensures a never-ending population explosion. Attempts at population control through chemicals or infanticide have always failed for the Moties, because those who (secretly or openly) breed uncontrolled eventually swamp those Moties who complied. Once the population pressure rises high enough, massive wars inevitably result. And the Moties are very good at war.

Humans have encountered eight distinct Motie subspecies, and occasional hybrids such as the Mediators. But there is also a ninth - the Warriors. And they are far superior in combat to any human soldier. To Engineers and Watchmakers, a weapon is just something else to build and/or repair. There are no fissionables remaining in the Mote system, but asteroid bombardments are more than adequate weapons of mass destruction.

As one would expect, these wars always end in the complete and total destruction of the current Motie civilization. However, Moties are unbelievably capable survivors, and enough always survive that reconstruction proceeds quickly — especially with the aid of the museums, as this is their intended purpose. They are located in unpopulated areas so as not to be targets during collapses. Population is controlled by disease and injury between collapses and reconstructions, but it obviously never lasts.

The Cycles of civilization, war, and collapse have apparently been going on for millions of years. They are so devastating that in the past, Mote Prime has been completely sterilized several times, to be repopulated by those living in hollowed-out asteroids. In the process, the Moties mutated from earlier symmetrical forms.

Every civilization arose, unlocked the museums, and discovered that that unless they could solve a problem that had plagued countless others, they were doomed. Thus, the Moties have become fatalistically resigned to the never-ending Cycles. Only a mythical character called "Crazy Eddie" believes there is a way out, and any Motie who comes to believe a way out is possible is labeled as insane and a "Crazy Eddie." This is why they call the system's Alderson point (which, unbeknownst to the Moties until human contact, leads into the photosphere of Murcheson's Eye) the "Crazy Eddie Point".

The Keeper, the museum's caretaker, then reveals itself, confirming all of this. It states that the whole charade is the work of a coalition of Motie Masters who have seized the opportunity the Lenin and the MacArthur represent in order to save themselves by escaping into the universe at large. But the Keeper is a childless Motie Master who has voluntarily been sterilized, and thus considers the well-being of his entire race, and as such, disagrees with such a plan.

The Moties can not stop breeding, so expansion to other planets would only postpone the Cycles. Nearby planets would soon be filled with Moties, and the Alderson Drive takes time to use — years of travel across systems from tramline to tramline to reach distant planets. Eventually, it would be easier for Moties to challenge humans for their planets, especially since humans cannot compete with Moties, technologically, biologically, or even numerically. Motie victory would be inevitable.

But then each Motie world would be left waiting for its neighbors to collapse, after which the survivors fight each other for the scorched ground, while their neighbors wait for them to collapse... Endless war. The Cycles, devastating as they are, have been confined to the Mote System. What the Keeper truly fears is a universe of Cycles!


Being an ultra-rational engineer with little or no imagination, I usually take books and movies at face value. It really takes some wicked symbolism to reach out and smack me in the face such that I recognize it for what it is. This is one of those times.

Surprise! We are the Moties. So, sure, we don’t have two arms on one side of our body, individuals don’t change sexes with any great regularity, and our physiology is not such that if our females don’t get pregnant every x years that they get sick and die. Sure. But, this story still about us and the future that awaits our civilization, unless we wise up and wise up quickly. Every society in human history that has reached critical mass ends up imploding in some way or another. They have outstripped their ability to produce the requisite food, or have had to compete with other societies for scare resources. War is one normal method of attempting to resolve that imbalance. Another is that the culture in question just… dries up and blows away, to be lost to history. And, since ours is now a global society, we have no more room to expand into in order to avoid this collapse. We are reaching the end of some very finite resources, such as cheap energy. Tribal instincts (me and everyone like me come first!) will start to predominate more than they have in ages. The Moties, by their very nature, were cursed to the Cycles.

I’ll leave it to you to figure out the moral of the story. I would highly recommend the book to sci-fi fans, as well as for those you into parables and allegories.

Book cover photo from Wiki.
Posted by zeppo at 11:29 AM