The Wit and Wisdom of Repo Man, as it applies to the Administration of George W. Bush. 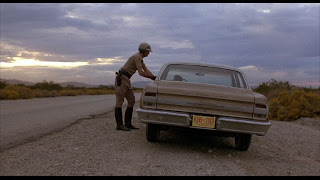 Thanks IMDB, although I gotta say, it’s rather annoying when you go around delete a whole bunch of quotes that have been compiled over the last five years. It isn’t like you don’t have really big servers. Some of those quotes from Buffy the Vampire Slayer and Mystery Science Theater 3000 were classics, and now they’re not there anymore… How sad.

Agent Rogersz: Good evening, Otto. This is Agent Rogersz. I'm going to ask you a few questions. Since time is short and you may lie, I'm going to have to torture you. But I want you to know, it isn't personal.

J. Frank Parnell: You ever feel as if your mind had started to erode?

J. Frank Parnell: Ever been to Utah? Ra-di-a-tion. Yes, indeed. You hear the most outrageous lies about it. Half-baked goggle-box do-gooders telling everybody it's bad for you. Pernicious nonsense. Everybody could stand a hundred chest X-rays a year. They ought to have them, too. When they canceled the project it almost did me in. One day my mind was full to bursting. The next day - nothing. Swept away. But I'll show them. I had a lobotomy in the end.

Leila: I'd torture someone in a second if it was up to me.

Leila: What if he's innocent?
Agent Rogersz: No one is innocent.

And, I implore you, please click on Wit and Wisdom for the other posts in this series. You won't be sorry.