O.K., this is for those people who end up here by searching on “rabbit enemies”… 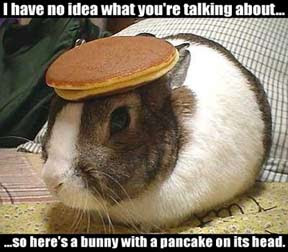 I seem to get several hits a day by people searching on “enemies of rabbits” or "rabbit enemies". I feel badly that I am letting these folks down. I mean, REALLY badly.... They obviously have a real concern, given that they are spending their time searching The Google, worried about what nasty thing is going after their bunnies. Or maybe, actually now that I think about it, maybe they really do desire to find out who the enemies of rabbits really are, so they can get rid themselves of their own troublesome rabbits. You monsters.

So, for those folks who keep ending up here, here is my list of Enemies of Rabbits:

There. That should do. Glad to be able to help you out. (For the more obscure references in the list, you might try the Internet Movie Database, link at right.)

UPDATE: Well, that didn't help much. I still got about four hits today by people searching on variations of "rabbits" and "enemies". And they all got directed to my post of early last year titled "Enemies", which has absolutely nothing to do with rabbits. This one doesn't show up at all. Well, that attempt at humor was certainly wasted.
Posted by zeppo at 5:05 PM