Glenn Beck is given the key to the city in Mt. Vernon, Washington. 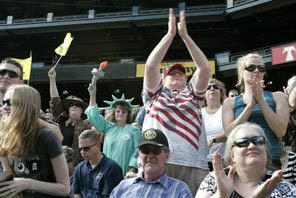 He also addressed a crowd of “about 7000” at Safeco Field in Seattle. I was very upset when I learned that Beck was from around here, Mt. Vernon being about 45 miles north of here.

I am not sure what it is about the Pacific Northwest that produces lunatics. However, I am convinced that we have more than our fair share. There was Ted Bundy, of course. He started his killing spree about 15 minutes away from where I work. And there was the Green River Killer, who worked about five miles away from where I work. And, more recently, there was the Washington D.C. sniper, who lived in Tacoma and actually bought his high powered rifle he used to pick off innocent people around D.C. while hiding in the truck of his car, specially modified for that purpose. And there was the lady (I believe she was a female) who wanted to kill her husband, so she tampered with a bunch of bottles of Tylenol, laced them with arsenic and put them back on store shelves, all to hid the crime of killing her husband. I also think the lesser known (nationally) Hillside Strangler in Spokane was originally from here. Ann Rule has made a good living writing about horrific criminals from here, including a book called the I-5 killer.

Personally, I think it has something to do with the weather here. Oh, much of the year, there is not a more beautiful place in the country. The mountains, forests and water make for some spectacular vistas. But the winter is another story altogether. It’s always overcast and dark, usually raining or in the process of either stopping or starting to rain. Everything’s always wet and slimey. It gets dark at about 4 p.m. It’s really damn depressing in November. That’s my theory anyway.

Now, what has all this to do with Glenn Beck? I’m just rambling, as I am certainly not trying to say that Beck is a mass murderer worthy of another book by Ann Rule. However, it is my contention that Beck is certainly rather unhinged. You only have to watch him on television or listen to some of his rants on his radio program to come to this conclusion. I think speaks volumes about our society today that this guy has both a national television and radio audience, he has a large and passionate following and he makes tons of money for the corporations he works for. In any sort of sane universe, this would not be so. Beck would be another nutjob wandering the streets, maybe down in Seattle’s Pioneer Square, yelling that the end is coming, and most people would try very hard not to make eye contact.

But no. This guy was given the key to the ciity of Mt. Vernon yesterday. Mt. Vernon is a nice little town. It is one of the largest growers of tulips in the world after Amsterdam and the rest of the Netherlands. It’s a nice rural smallish city with a hometown feel. And their mayor goes and gives Beck a huge honor.

Now, this is not to say that this all went off without any protests. I understand the town of Bellingham, in protest, gave a key to their city to Jon Stewart. According to this story in the Seattle Times, there were several hundred people who showed up to protest. I thought briefly about doing it, but quickly arrived at the conclusion that it was pointless. There is no arguing with a crazy person, and his supporters, who are all convinced that he is speaking “The Truth.” There’s nothing so pointless as arguing with true believers.

I just wanted to point out this paragraph from the story in the Seattle Times. It’s really too bad there wasn’t a picture of this.

Early Saturday evening, outside McIntyre Hall, Beck's supporters and critics mingled and occasionally broke into debate. Cars and trucks paraded down the street, with honking and jeering. One group made an enormous sign playing off the Mad Hatter pouring a cup of tea, only their sign said "Mad Hater" — a reference to Beck and the national "tea-party" protests.

This doesn’t really explain whether this group was a bunch of Beck supporters or protesters. If they were protesters, it was a good play on a theme and right to the point. However, given the atrocious spelling of the Tea Party protesters, there’s a good chance that this was a sign from Beck’s supporters and they didn't have a clue.

Photo from the Seattle Times. I particularly like the lady dressed up as the Statue of Liberty. Yes, I can see how someone calling the first black President a "racist" and "someone who hates white culture" and who helps circulate the rumor that President Obama desires to round people up based on their political affiliation and put them into interment camps is symbolic of liberty and freedom. "Give us your tired, your poor, your insane masses yearning to destroy everyone who holds opinions different than theirs..."

UPDATE: I would like to thank Bill Moyer, who is the Director of the Backbone Campaign. This is the organization that was responsible for the Mad Hater protest sign this last weekend. He was kind enough to comment on this post and give me a link to a photo of the sign that, unfortunately, the right-leaning Seattle Times didn't see fit to include in their print or web edition. Here is that photo. Thanks again to Mr. Moyer. Great sign. Perhaps I should have gone after all. It looks like I could have done some nice networking with non-insane people. 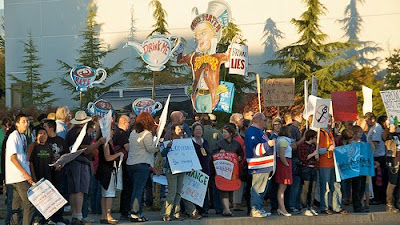