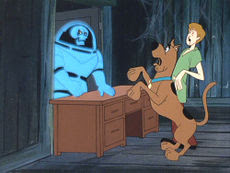 “Let’s get out of here, Scoob! It’s that horrible fiend, the obamanible Healthcare Reform Ghost! He kills old people and little dogs, and he’s also a socialist!”

(I assume that everyone remembers how every single episode of the original Scooby Doo ended, with the monster/ghost being unmasked to be one of the main players in the game who had an interest in scaring everyone off. Now, who might that be….? This sort of ruins the joke, explaining everything, but sometimes I am rather obtuse. I hate being the only one who gets one of my jokes.)
Posted by zeppo at 8:13 AM