No one ever said that protesters had to make sense. 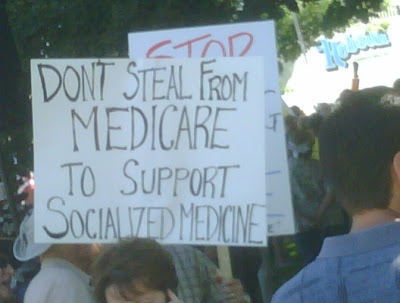 From The Denialism Blog, here's a fine picture from yesterday's "9/12" rally, which was to protest... something. Apparently, a lot of people don't think that everyone in the country should have access to health insurance whose company can't just drop their coverage for whatever reason they want. And there are some people who don't like deficits. But only under a Democratic administration, of course. Deficits were fine under George Bush. And some people apparently don't like Muslims. Or Hitler. Or socialism. Or communism. Or fascism.

But what the hey, it seemed like a nice day to have a mass demonstration. Did you know that Freedom Works (run by ex- Republican majority whip Dick Armey) was a big sponsor of yesterday's demonstrations, and they were actually charging other organizations for participating? So I heard on Rachel Maddow. Yep, really a grass roots affair.
Posted by zeppo at 9:40 AM