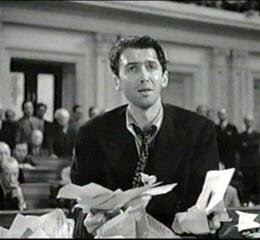 I have to contain my desire to chew on nails when I see the Republicans and conservative pundits label, usually successfully, a Dem (such as John Kerry) as a “flip-flopper”, because they catch the guy saying something confusing and makes it look like he has totally changed his position on something (sometimes this is actually true, sometimes it is a total fabrication), when the Republicans make a living on doing just that. And does the press ever call Republicans out on that? No. It’s always the Democrats that get bashed.

Here’s a good case in point regarding the use of a filibuster in the Senate. Via Digby:

It is so rich listening to these Republicans decry the tyranny of the majority and stand up for the inalienable right to filibuster after their tiresome "up-or-down vote!" mantra of the last six years. Nobody ever accused them of being intellectually consistent. But this takes real chutzpah. From Think Progress:

When Democrats held up the confirmation of a few of President Bush’s right-wing judicial nominees, conservatives repeatedly complained of “obstructionism.”

Senate conservatives had threatened to deploy the “nuclear option,” which would have eliminated the traditional Senate practice of filibustering.

Sen. Trent Lott (R-MS): “[Filibustering] is wrong. It’s not supportable under the Constitution. And if they insist on persisting with these filibusters, I’m perfectly prepared to blow the place up.”

Sen. Mitch McConnell (R-KY) spokesman: “Senator McConnell always has and continues to fully support the use of what has become known as the ‘[nuclear]’ option in order to restore the norms and traditions of the Senate.”

Today, however, these conservatives are proposing the exact opposite of the nuclear option — a permanent filibuster. The Washington Post reports today that McConnell has requested that all Iraq amendments meet a 60 vote threshold, an effort designed to quietly block withdrawal legislation from ever passing the Senate:

Minority Leader Mitch McConnell responded to Reid with a counteroffer: an automatic 60-vote threshold for all key Iraq amendments, eliminating the time-consuming process of clearing procedural hurdles. … [A]ll the controversial war-related votes held since Democrats took control of the Senate in January have required 60 “yeas” to pass.

“It’s a shame that we find ourselves in the position that we’re in,” McConnell said. “It produces a level of animosity and unity on the minority side that makes it more difficult for the majority to pass important legislation.”

We have gone, in just over a year, from “filibusters are wrong and evil” to a proposal for a permanent filibuster any time the subject of the Iraq war comes up. Just who exactly are the hypocrites here?

P.S. Oh, yeah. And a big Razzie to the people in the mainstream media who are referring to this as a "Democratic filibuster". God, they can't even get that right.
Posted by zeppo at 5:21 PM