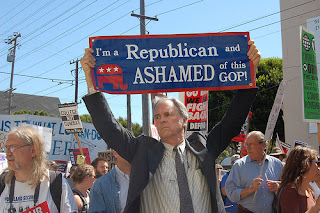 Here’s a telling quote from Senator Kent Conrad, via The Young Turks.


Cenk: Exactly, that’s a perfect situation. We’re actually going to make you physically filibuster it. Go ahead and give speeches for 24 hours a day. We’re removing the rule that out of politeness and courtesy that we don’t make you do that anymore. We’re going to have you go and read the phone book, and tell us how much you’re against stem cells or the minimum wage, or for rest for the troops.

Senator Kent Conrad: Yeah, I think there’s a growing consensus that we ought to do that. And let me be clear, I’m not saying we don’t have an ability to speak out. Clearly we do. We have a narrow but clear majority in the United States Senate. We have a narrow but clear majority in the House of Representatives. And so we do have more of an ability to have our points of view heard than we did when we were in the minority, but it’s also the reality. The President has the biggest megaphone, and, you know, until Democrats have the White House, they’re always going to be at a disadvantage in terms of getting a message out. With that said, with that said, I think that we could do a better job making our points, and one part of that is to let the American people see just how obstructionist this Republican minority is being. The leader has had to file cloture now over 40 times already this year. And cloture, as you know, is a special procedure to stop debate, to stop filibusters, in order to reach conclusion on legislation. I had a Republican colleague tell me it is the Republican strategy to try to prevent any accomplishment of the Democratic Congress. That is set in their caucus openly and directly that they don’t intend to allow Democrats to have any legislative successes, and they intend to do it by repeated filibuster.


Wow. O.K., color me gobsmacked. I. Am. Shocked. And here I was thinking that Republicans would actually try, after getting their butts kicked up and down the country in the elections of last year, to get some actual work done and stop playing their stupid games. (No, I actually didn’t think that. That’s called sarcasm...) I had actually read a very similar sounding quote out of our state legislature in Washington state from a few years ago, so this doesn’t surprise me at all that someone would actually admit that this is their plan.

What is with the Republicans and conservatives in this country? They are being obstructionists, just for the pure hell of it. If I were to try to point out a single driving factor for these people, instead of 10 or 20, it would be their hatred of Democrats and liberals. They will do everything within their power, by whatever means necessary, to defeat Democrats at every turn. The issue does not matter. The pluses or minuses of their respective positions do not matter. Overwhelming public opinion does not matter. The only thing is to win, to “beat” a Democrat. It is some sort of game to them, called “Politics”. The common good of the country is not even in sight. I get the feeling that if a Democrat were to introduce legislation to recognize that blue is a very nice color for the sky, Republicans would find a way to argue about it and try to score some political points with their angry base.

This little tidbit may be small potatoes in the bigger scheme of things, but it is very telling about the state of mind under which the Republicans operate these days.


As the nation's top doc from 2002 to 2006, Dr. Carmona was ordered not to discuss embryonic stem cell research or the emergency contraceptive known as Plan B, he said last week in testimony before the House Committee on Oversight and Government Reform. He was ordered to water down a report on the dangers of secondhand smoke.

He definitely couldn't point out the failings of abstinence-only programs. In speeches that were vetted by other political appointees, he was ordered to mention President Bush three times for every page.

He was even discouraged from going to the Special Olympics, a charitable event that supports disabled Americans, because the organization is linked to a prominent Democratic family. "I was specifically told by a senior person, 'Why would you want to help those people,'" Dr. Carmona said, referring to the family of Sen. Ted Kennedy, D-Mass.


Have we, as a nation, so lost our way that people cannot even understand that there are bigger issues to deal with other than for your frikkin’ political party to “win” every single battle, large and small? Jesus H. Christ. No wonder this country is in the sorry state that it is.

Although I am counting the days when we can elect a Democrat to the presidency and maybe actually inject some sanity back into pretty much everything this government does, I am also very worried. The Rethuglicans will, once again, just as they did in the days of President Bill Clinton, take out their bows and arrows, slingshots, mortars, AK-47’s, bazookas, cruise missiles, whatever, and fire, without letup, at any Democrat who inhabits the White House. The eight long years of the Bush administration will be forgotten, as will the do-nothing, rubber stamp Republican congress. Everything will, once again, be the fault of those eee-vil Democrats.

Just wait. When we have a Dem back in the White House again, the Republicans will be making the case that the botched war in Iraq and the next terrorist attack that this country faces will be the fault of the Democrats. And the mainstream press will just lap this up and spit it out, labeled as “reporting”, without any questions attached.


Bob Geiger reports on some Democratic pushback. Finally.
Posted by zeppo at 8:08 PM