I would like to wake up now, because I’m not enjoying this dream at all. 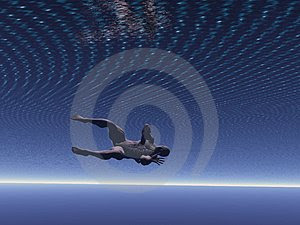 This IS all a dream, right? I mean, all this crap cannot really be happening in the United States of America.

The Dow Jones had its worst week in history. Billions and billions of dollars of wealth (at least, on paper) have been wiped out. People are now worth about 20% less than they were ago a few weeks ago. The financial markets look to be really melting down, and it has turned into a worldwide epidemic. England has just frozen all assets belonging to Iceland, after that country took some pretty drastic action to save itself from bankruptcy, and England doesn’t like the fact that they may not get all their money in Icelandic institutions back. This is getting really scary, and a lot of very smart economists are very worried.

And what have we got going on in the race for the most important political office on the face of the planet? We have John McCain and his Caribou Barbie doll, Sarah Palin, essentially whipping their crowds into a frenzy, calling Barack Obama all sorts of names and trying to tar him with some very dubious associations. And their crowds, taking their cues from those two, are going Full Monty. Catcalls of “terrorist!” and “kill him!” are being shouted out at Republican rallies. It has gotten so bad that McCain now has tried to tamp down the outright hatred and fear of his supporters. He took the microphone away from one lady (who looked and spoke like she had about a sixth grade education) who said the Obama is “an Arab.” He said that Obama is a decent human being and a good America who he had very deep political differences with, and McCain’s supporters at this rally actually booed him! They were booing their own party’s presidential candidate for, I guess, not agreeing that Obama is a terrorist.

I saw one clip on MSNBC, either Countdown or the Rachel Maddow show, where someone with a cell phone camera were asking questions of people streaming into a Sarah Palin rally. Many people, not just one or two, flat out stated that Obama is a terrorist. Not a “terrorist sympathizer”, but a “terrorist.” It’s funny, but I had thought that to actually be a terrorist, you have to have blown up a building or a car, and actually tried to do physical damage to people and/or property. It appears to me that these nutcases have totally lost track of the meanings of words. Anyone they dislike enough, they can label as a terrorist. It used to be that they just called their enemies “liberals.” Granted, there was a lot of venom and hatred associated with that name, but I guess that is no longer good enough. No, they have to now call their enemies “terrorists.”

It appears to me that John McCain has totally lost control of his campaign. He doesn’t know what to do. He can’t win on any of the issues, and his attempt at character assassination has blown up (pun not intended, or maybe it was) in his face. It has gotten so bad that very conservative columnists like George Will and David Brooks have written extremely critical columns of how the McCain campaign is being run.

I believe that McCain was trying to show what an untrustworthy and untruthful person Obama is (good luck with that), but he didn’t count on the outright lunatics of his faithful taking that one step further. No mere character assassination is good enough for them. No, they have to actually think the candidate from a major political party of the United States of America is an actual terrorist. “Obama doesn’t respect the flag?” Pfft. Small potatoes. Let’s go for the gusto!

If this were really happening, of course, I might be pretty worried that some crackpot might get so wound up that he might just try to act on all this hatred that is being whipped up in the name of winning an election. I mean, it isn't like this country doesn't have a history of violence, especially toward black men. Right? And given what we are seeing out of the run-of-the-mill McCain supporters, I would imagine that there might be some nut out there who likes guns enough and dispises Democrats in general and Obama in particular to actually maybe try to take a pot shot at him. Like those three people arrested in Denver a couple of months ago, armed to the teeth, on a "mission" to take out Obama? I mean, in a sane world, politicians would be very careful before trying something like this.

This is on the same day, of course, that the investigative report from the Alaska state legislature came out that concludes that Sarah Palin abused the powers of her office. This is the same Sarah Palin that has been the main attack dog, accusing Obama of being untrustworthy. From HuffPo:

ANCHORAGE, Alaska — Sarah Palin unlawfully abused her power as governor by trying to have her former brother-in-law fired as a state trooper, the chief investigator of an Alaska legislative panel concluded Friday. The politically charged inquiry imperiled her reputation as a reformer on John McCain's Republican ticket.

Investigator Stephen Branchflower, in a report to a bipartisan panel that looked into the matter, found Palin in violation of a state ethics law that prohibits public officials from using their office for personal gain.

The inquiry looked into her dismissal of Public Safety Commissioner Walter Monegan, who said he lost his job because he resisted pressure to fire a state trooper involved in a bitter divorce and custody battle with the governor's sister. Palin says Monegan was fired as part of a legitimate budget dispute.

Monegan's firing was lawful, the report found, but Palin let the family grudge influence her decision-making _ even if it was not the sole reason Monegan was dismissed.

The report notes a few instances in which Palin pressed the case against trooper Mike Wooten, but it was her husband, Todd, who led the charge. Todd Palin had extraordinary access to the governor's office and her closest advisers and he used that access to try to get Wooten fired.

I am wondering just what Todd Palin would find to keep himself busy if he became “The First Vice-Dud.” And people thought Jimmy Carter’s brother was an embarrassment.

So, I guess I have concluded that I have been dreaming. Reality just cannot be this weird. I really have to stop eating that cold pizza before I go to bed.

Unpleasant Dream photo from here.
Posted by zeppo at 7:31 PM