Taxi to the Dark Side. 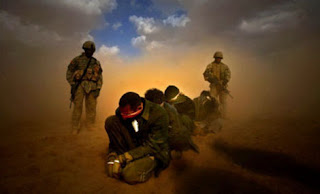 I would like to make clear that this is not a movie review. I sometimes do movie reviews at this website, and this isn’t one of them. This is about the content of Taxi to the Dark Side, and what it says about us as a nation, our ideals, our morals, our souls.

The wingers of this country are so calcified in their politics and views of the world that this movie, if they were forced to watch it, would probably be viewed with the same scorn and distain as something from Michael Moore. But for those Americans who are still sentient beings, this documentary is something that should make you sick to your stomach.

I won’t go into the details of the film. Take a look at the IMDB entry here, if you want to know what the film is about. Let’s just say it lays out how the United States of America, that beacon of freedom for the entire world, has come to view torturing people, many of them who are not guilty of anything other than being in the wrong place at the wrong time and of having a different skin tone than ivory white, as not only acceptable but mandatory. This film lays out in great deal how the U.S. ended up torturing and ultimately killing an innocent taxi driver. That is how his death certificate was signed by the U.S. military. “Homicide.” That’s what his death certificate says. And this unfortunate person is only one of over 100 people who have died while in the custody of the U.S. military.

As I said, I sat there through the entire film with a white-hot knot in my stomach. Anguish, anger, depression, you name it. It was all there. I was not sure what I was feeling when listening to the actual prison guards (M.P.’s, they were called) in describing how they treated prisoners in general and this guy in particular. They felt like they were under orders to do this, and they didn’t want to be see as “going against their buddies.” I have taken enough psychology courses to know that human beings, when put in very crazy and stressful situations, can end up doing things that they would have never considered they would be capable of doing. Still, I felt little remorse for the fact that they received a dishonorable discharge from the military. But the overwhelming feeling that I came away with is that Dick Cheney is a monster. Absolutely. He was behind it all, and said as much on some interviews he gave to people like Tim Russert. John Yoo and Alberto Gonzales are shown to be slimy little toadies who would do anything their masters called for them to do, including fabricating nonsensical legal judgments that do nothing else than protect their masters from legal jeopardy. All of them should be subjected to exactly the same treatment they decided to perpetrate on others.

Make no mistake about this. The Bush administration has done incredible damage to the United States of America that will take decades to repair, if we even can repair that damage. Politicizing every single department of the government, including the Department of Justice, is just one of their transgressions that will almost certainly go unpunished. But legitimizing and “normalizing” torture under the guise of “protecting” our country has changed the fabric of what this nation is and has proudly stood for since 1776. We have voluntarily brought ourselves down to the same level of the worst third world dictators and Soviet-era police states. We have no moral credibility left with the rest of the world. We cannot even morally object if some other country picks up one of our citizens or soldiers and tortures them. On what rational basis could be possibly object?

I absolutely cannot understand how these people can go to sleep at night. Aside from the fact that it is a proven fact that people being tortured will tell their interrogator anything to get them to stop, including very, very incorrect information, torture is morally wrong. Any country who aspires to be called “civilized” should not condone it; much less actively pursue new ways to administer it. What the United States has been doing for the last eight years is repugnant and sickening.

Morons like Rush Limbaugh wonder aloud (while getting very well paid for it) why some citizens of this country “blame America first.” Jesus Christ. Open your f*ckin’ eyes once in a while, and maybe you would understand.