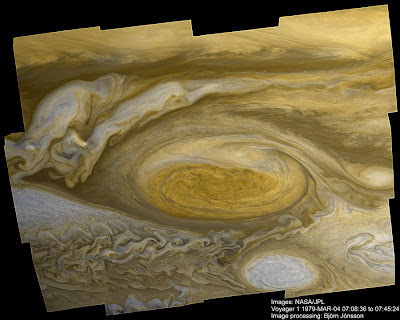 Wow. That's about all the narrative necessary for this one. Just, wow....

Snapped from the New Horizons spacecraft on its way to Saturn.

Photo from NASA. Click on the photo for a (slightly) enlarged version.
Posted by zeppo at 9:26 AM No comments:

Sorry for yet another college football thread: Missouri going to seek membership in the SEC.

See here for the very latest, which will no doubt be totally out of date in the next 15 minutes.

Ok, but here's one thing that I haven't seen anyone mention before. If Missouri goes to the SEC, do you realize that will give that league THREE TEAMS named Tigers? LSU, Auburn and now Missouri. And two other teams are named Bulldogs; Georgia and Miss. State. Yes, the SEC plays great football. They should apply to the NFL, they are so good. But seriously, you are looking very, very unimaginative with the names.
Posted by zeppo at 12:46 PM No comments:

Seatle Times and Seattle P-I have a much different take on Occupy Seattle.

This is how the lead story on the web version of the Times presents the story.

Hum. If you are hoping that the "Occupy" movement really starts to coalesce and influence the political direction in this country, "waning" is not a word you really want to hear. Synonyms for that word include, "diminishing" and "shrinking." Not really good.

And this is how the lead story on the web version (which is, unfortunately, the only version of the P-I anymore) plays the same story.

Wow. The movement is really heating up. Getting hotter, bigger. That’s quite a radical difference, isn’t it, about how two news organizations play the same story.?

Personally, I would go with the Times version, because, you know, who would have their fingers on the pulse of a grass roots movement that is going global than a seller of pork products who operates from a corner stand? If the view of a political movement by a hot dog seller isn't worthy of a front page story, I certainly don't know what is.

I suppose the P-I version might be talking about how one goes about heating up your hot dogs, but I rather doubt it.

Every once in a while, the Times runs a story that just tells you what their world view is.
Posted by zeppo at 8:15 AM No comments:

Perhaps the most ill-conceived advertising campaign ever. 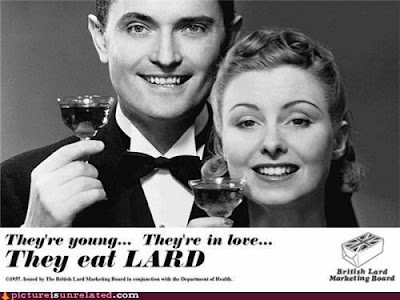 From Picture is Unrelated.
Posted by zeppo at 1:30 PM No comments:

The Rapture is now on for Oct. 21st. How many times does one have to fail completely and utterly before they understand they are wrong? 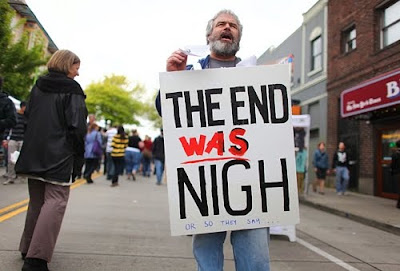 Apparently never, I guess. Remember Harold Camping, the lunatic fundamentalist who convinced a lot of True Believers that Judgment Day was going to occur last May 21st? A large number of truly deluded and easily lead people got rid of all their possessions in order to be ready to ascend to Heaven when the Rapture occurred.

Of course, Camping got it wrong, in that said event never happened.

Well, now he is back and is now completely confident that the Rapture will occur on Oct. 21st. That whole May 21st thing? That was just the last-ditch date for everyone to get their respective houses in order. Oct. 21st is when the Hammer is going to fall. Jesus is really upset with everyone who isn’t a True Believer, and is going to met out the appropriate punishment for our wicked ways.

That is apparently how Camping sees it. Given what a complete and utter lunatic he looked like on May 22nd, I can’t imagine this guy even showing himself in public anymore, much less making yet another prediction that will be shown to be exactly what it is, total horseshit, on Oct. 23rd.

What is it with the human psyche that allows this kind of behavior? How can this guy believe any of this? And how could anyone listen to him and say, “Yeah, he may have been wrong last time, but boy, he is really spot-on this time! Wait until those non-believers see all those earthquakes and Jesus bringing fire and brimstone down on the world!”

I am totally convinced that perhaps a quarter of the human population of this planet is completely insane. They have lost the ability to deal with actual reality, and have retreated into a complete fantasyland just in order to survive. And then, when facts show reality to be something other than what they fantasize, they somehow find a way to rationalize it all away, just so they can maintain their fantasy that they are the only ones that understand and everyone else is in for their comeuppance.

Photo from the Seattle PI blog.
Posted by zeppo at 1:05 PM No comments: