Another movie review for a film you have probably never heard of: A Tale of Two Sisters (Korea).

One of the staples of this blog was to do one or more movie reviews of scary movies just before Halloween.  Although I doubt I should call it a “tradition,” I thought I might take this opportunity to review a pretty intense horror film.

The film is A Tale of Two Sisters, which was made in South Korea in 2003.  I only knew about this film because I have the DVD of the 2009 American remake entitled The Uninvited.  (There is also a 1944 film of that same name, which stars Ray Milland.  That is a fine vintage haunted house film, but discussion of that one should be left to another day.)  The Uninvited is a pretty decent horror film.  However, once I discovered that there was an earlier Asian version on which that film was based, I decided I needed to see it.  Asian horror films are always superior to their American remakes, such as Ringu/The Ring, Dark Water, and Don’t Look Up. 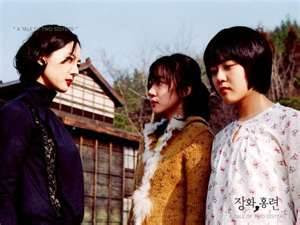 I will get to the punch line first.  This is a great horror film.  The plot is very interesting albeit highly convoluted, the acting wonderful, the cinematography is fantastic, and the scares are pretty great.  I highly recommend it, if you can find the DVD.  As of this writing, this film is also in Comcast’s On Demand film selections for under three bucks.  Do you like horror films that make you think?  (Note:  Slasher films involving a group of teens out by themselves terrorized by a scary wossname armed with all sorts of very sharp implements are NOT horror.)  You should see this film.

Asian horror films are very non-linear compared to your standard American films.  That is, they jump around a lot.  They also tend not to explain very much to the audience in a way of a backstory or any explanations of things that you might actually need to know to understand what’s coming next.  American films, at times, spoon-feed the audience with all sorts of forced revelations and expositions.  Not so with Asian horror films.  As a viewer of a film like A Tale of Two Sisters, you are expected to be fully alert and engaged. 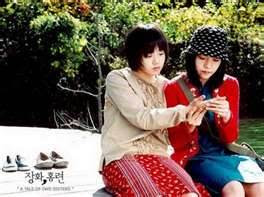 Personally, this is a very difficult task for me, as I am a very literal person.  If I am presented with a scene or a conversation, I almost always take it at face value.  This is a mistake when watching this film.   Some scenes are flashbacks without really explaining they are flashbacks, and almost ever scene involves some sort of subtle symbolism as to what is going on.   With this film, once I watched it, I went on the Internet Movie Database  to read some reviews there.  A number of things were explained to me, but many were still left unanswered.  And then I watched it again.  Now that I knew the ending and was armed with some facts about the symbolism involved, I came away with a much greater understanding, as well as a great admiration, of this film.   But there are still a number of scenes that are pretty bizarre and inexplicable, even when I knew the ending.  As an aside, if you have seen the American version I discussed earlier, you will have at least a partial knowledge of what is going on.  But there are many, many more twists and very shocking scenes that didn’t make it into the Hollywood version.  Even with the plot twist at the end of The Uninvited, I suppose the filmmakers decided that American audiences couldn’t process all the information that is in Two Sisters.

I do not want to discuss the details of this film too deeply.  I am giving this film a high recommendation for you to go find it (if you haven’t seen it already), so I don’t want this review to be full of spoilers.  And I can’t really figure out what to write about without playing spoiler.

The basics of the plot, to begin with, are pretty straightforward.  There are two teenage sisters, living with their obviously overwhelmed and emotionally disengaged father and a pretty malevolent stepmother.  One of the girls (you aren’t absolutely certain which one) has just been released from some sort of mental institution and is coming home for the first time in a long time.  Some dark incident in the past, referred to several times, was obviously one of the triggers for this girl’s complete mental and emotional breakdown.  The girls seem very attached to each other and united in dislike that borders on outright loathing of the stepmother.   Then, the strange events start occurring that become more and more bizarre and inexplicable.

I will admit that a couple of the scary moments in the film rely on the usual tricks of scary movies, such as a hand jumping out from a dark place and grabbing you.  I look at those kinds of scary tricks as just that, a trick, and a cheap one at that.  But there are not that many of those in this film.  In fact, there were a number of scenes where I was expecting one of those tricks to take place, and they didn’t.  That actually had the effect of making those scenes that much more suspenseful.  There are several sequences that are just brutally difficult to watch, such as the scene where the evil step-mum grabs the younger sister and locks her in the dark closet, of which the girl is obviously terrified.  The screams and pounding on the door are pretty gut wrenching, as is the reaction of the stepmother.  How could someone hate a child so much to do that to them?  There are several scenes that just come out of nowhere, such as the young female dinner guest suddenly having a seizure or fit during a very, very awkward conversation at the dinner table.  That was a very shocking scene to me.  But even though it appeared out of the blue, it is yet another clue as to what is going on in the film.

Again, this is a highly recommended film, if you can find it and don’t mind having to read the English subtitles along with simultaneously watching the unfolding scene.  I would also plan on watching it more than once.
Posted by zeppo at 10:05 AM No comments:

Siemens has released pictures of its truly gargantuan B75 wind turbine rotor blades. As you might imagine, the prototype turbines that will use these blades boast some staggering statistics of their own (Airbuses at the ready, please). 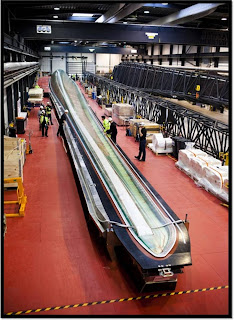 Remarkably, the 75-meter-long (246-ft) blades consist of a single component made from epoxy resin and balsa reinforced with glass fiber, cast in a gigantic mold using a process Siemens has cunningly named IntegralBlade. 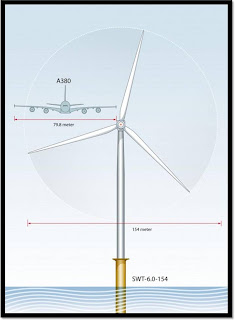 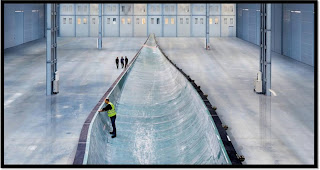 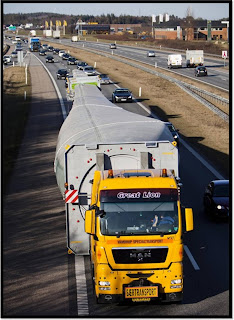 Siemens has already seen 6-MW turbines installed at the UK's Gunfleet Sands wind farm, albeit with 60-m (197-ft) blades. Thanks to a process Siemens has branded "QuantumBlade," it claims the B75s weigh four fifths of conventional blades. "The weight reduction is achieved by using specially designed blade profiles that are also shaped in a way that delivers maximum rotor performance at a range of different wind speeds," the company says.
Posted by zeppo at 7:33 AM No comments: