Yet another fatal shooting, this time at Texas A&M.

As I noted in a previous post about the shootings at the theater in Aurora, Colorado, there will continue to be these kinds of violent, random acts involving lunatics and guns, because this country lacks the political will to actually do anything.

But I was going to note that, since the pro-gun folks' favorite proposal is to let everyone have and carry arms, this means that people will really need to be armed to:
1) Go to the movies.
2) Go to a place of worship, regardless of religion or denomination.
3) Go to class, high school or college, or just be walking by a school.
4) Go out to a bar, even the "artsy" kind that you might find in Seattle.
5) Go to a museum, such as the Holocaust Museum.
6) Work in any organization that might be seen as supportive of "liberal" causes.

I got that list from events that have happened or almost happened in the last couple of years, and I didn't even have to think more than about 30 seconds.

I wonder when the pro-gun people might want to rethink their proposed approach.  Does anyone really think that would be a credible deterrent when nutjobs with a grudge and a desire to be famous are involved?  And how many more innocent people might get shot if, all of a sudden, there was a crossfire in any of these places (like in a dark movie theater filled with smoke and lots of confusion) that leaves people nowhere to flee?

Is the "Hunger Games" a ripoff from the 2000 Japanese cult film, "Battle Royale"?

I just watched Battle Royale last night on PPV, a Japanese cult film from 2000.  I had never heard of it before, but some of the scenes in the preview looked pretty compelling.  Once I got into the film, I was going "Hey, wait a minute...." 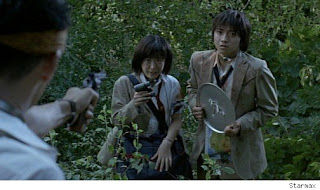 Apparently, this is not a new observation.  This controversy has been going on for some time, even before the movie version of The Hunger Games.  See this story for an example.  Of the few that I have read, however, the writers seem to be going out of their way to marginalize those who might suggest that Suzanne Collins took her ideas right out of Battle Royale.  OK, sure.  There aren't that many original ideas running around anymore, especially when it comes to films.  But really...  Let's take a bit closer look at this, given that Ms. Collins is saying she had never heard of this film when she was writing The Hunger Games.

The main drama in each comes in when groups of young people are sent out in an isolated area and are required to kill each other to survive.  Per the rules, only one can come out alive.  (That's the first similarity.)  Yep, the two groups came to be in this predicament in totally different ways.  But that, as the linked article might suggest, isn't a huge difference in my mind.  Each of these contests is government sanctioned.  (Second similarity.)  Each of these contests creates a media frenzy and is considered to be a huge sporting event.  (Third similarity.)  Each contestant (for the most part, which I will discuss later) is there against his/her will, being chosen by random lottery.  (Fourth similarity.)  Each contestant is provided a weapon, all different from each other, with some being much better than others but sometimes, the oddball weapon is of much more use than they might have expected.  Bow and arrow or crossbow are highly prized items.  (Fifth similarity.)  Announcements are made periodically through the contest, mostly to tell everyone who has been killed during the last period.  (Sixth similarity.)  Smaller alliances within the big group are formed, in order to hunt down the individuals easier.  (Seventh similarity.)  Survivors of earlier games are included in the current game.  (Eighth similarity.)  The heroes of the story are a pair, boy and girl, trying to survive together but ultimately know that they may not be able to both survive, given the rules of the game.  But they are certainly going to give it a try.  (Ninth similarity.)

Now, it is certainly possible that Suzanne Collins had had no exposure to this film before she wrote her books.  But boy...  That claim certainly seems, to me, to be really stretching at the bounds of credibility.  Some of the articles that I noted earlier really played up the differences between the two.  Well, sure.  If someone was going to copy someone else's idea, you wouldn't do it scene for scene, would you?  I mean, The Magnificent Seven is a different movie with different settings and different dynamics, but the idea still came from Kurasawa's classic, The Seven Samurai.  And the earlier film was given due credit in the American western version directed by John Sturges.  But to have that many, very detailed similarities between the two doesn't seem to be overshadowed by some admittedly different plot aspects (such as why these games are being conducted in the first place).

Like I said, it is possible, but boy.  I certainly see why some critics are really howling about how unlikely it is that Ms. Collins really had no idea she was writing something that paralleled so closely a huge hit film in Japan.
Posted by zeppo at 11:26 AM No comments:

As usual, NBC's coverage of the Olympics really sucks.

O.K., I am going to start out by giving NBC a few props here at the beginning.  They do have some extensive, live coverage available on line.  That's really nice.  Plus, during the day (when most people are at work, of course), they have three or four channels going of live sports, including ones we don't see a lot (e.g., archery, team handball, water polo) and they don't exclusively focus on Americans.  So, hats off to NBC for those developments.  Those are good things.  Thanks.

But your prime time coverage is still that same crap that you always do.  You want to watch the Olympics?  Then you are going to do it on our terms.  It's like they think they are showing the Outer Limits.  "We control the horizontal.  We control the vertical.  We control all that you see and hear...."  They seem to believe that they Olympics must be presented as a reality show.  It's just all a bunch of raw material that they can slice, dice, omit, re-order, etc., however they feel like it.  They are going to show you all Americans, all the time, except for some events which they obviously can't do that, like diving.  But even then, they have already decided which countries they are going to show and not show.  They never, ever show all the competitors in diving.  They recently received a bunch of criticism for not showing a very dramatic moment involving Russian gymnasts.  They wanted to keep the audience in suspense about whether or not viewers would keep watching, which would keep them watching.

I see the same criticisms, over and over, every single Olympics that NBC broadcasts.  Yet then never change.  Hey, NBC!  Pay attention, dammit!  The Olympics are not some reality show that is open to your own interpretation.  It contains its own dynamics and drama without you trying to insert your own manufactured drama.  You should not be screwing around with the content just because you think you can "maximize eyeballs" on TV sets.  And I have news for you.  A lot of people I know have to go to be before 11 p.m. (that would be 10 p.m. for me) as they have to go to work in the morning.  Would you PLEASE get over yourself!  You are not the show here!  They Olympics are!