I have been having an ongoing "discussion" that could accurately called "a feud" with my younger brother who is, gotta say, a huge conspiracy theorist.  He believes that our own government was either behind or at least aided and abetted the attacks on 9/11 and he is listening to nothing I am saying.  Last night, I posted what I thought was a relatively harmless quote on Facebook from Neil deGrasse Tyson that essentially said that we should not be running our government by someone's belief system.  My nephew went bonkers apparently and tried to engage me on this. I think his main point is that belief in science and belief in religion are exactly the same.  Facebook is a horrible forum to try to debate something like that, but it's pretty much hopeless for me to try to convince either of these two relatives about anything.  They have made their mind up and it is me who is "out there" and has a closed mind.

I am just at a total loss about how to interacting with society anymore.  I feel I must first figure out what a person's "view of reality" is before I actually say anything meaningful.  I am just so alienated right now.  I have reduced myself to the role of disengaged audience.  It's all some sort of super strange performance art where I have no idea what is going on but am just watching and trying to take it all in with some sort of morbid fascination waiting on the next bit of strangeness that the performance artist is going to throw at me next. I have no interaction with the people on the stage and what they say and do has no relationship to me.  If our society is going to drown itself in a sea of ignorance and hatred, at least I have been witness.  It isn't like I am going to get a chance to testify in front of anyone, of course.  But it matters to me, apparently, that I watch this occur.

I have degrees in both engineering and science and have been in a several technical jobs over the last 35 years that require disciplined thinking, logic and problem solving.  None of that seems to matter anymore in today's society and I am frankly appalled.  This really hits home when it is coming from my immediate family.  I don't even really want to talk to these people anymore who I once thought I knew.

I should really drop Facebook.  It's making me really unhappy and upset.
Posted by zeppo at 8:44 AM No comments:

What do you get when you combine a famous painting in the Louvre and The Village People? 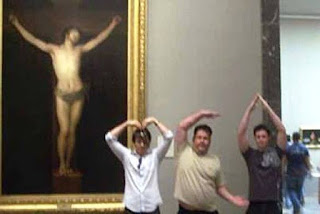 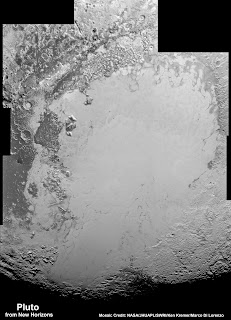 I can't get over this...  Regardless of what Pluto actually looks like, it's amazing to me that we are even able to see Pluto in this amount of detail, given that it has just been a tiny speck in the vast cosmos to us up to now.

However, given the detail in this picture (go to the link provided if you want to see a much larger version), I think speculation is rampant about what we are exactly seeing and what it means.  To me, the white mostly unmarked area is obviously a sea of frozen nitrogen.  You can see where the two regions meet how it looks a whole lot like a frozen lake where it meets the shore on Earth.  You can see the islands that protrude from the ice where the elevation of that "rocky" landscape is higher than the level of the frozen fluid.  If that is the true meaning of this picture, then the next question obviously becomes "what the heck caused that massive amount of landscape to be liquified and then freeze into place so it could turn into the level surface we see now?  I am still favoring the theory of a sideswipe by some larger passing body that ended up with a marked up Pluto and a very large orbiting moon, Charon.  I hope that's what scientists, the ones who really are experts in these questions, come up with.  But any answer that addresses these questions will be fascinating.
Posted by zeppo at 10:17 AM No comments:

Police around the country continue with their out of control tactics.

I suppose one of the things that really upsets me (among many others) about all the stories regarding out of control policemen and police departments around the country is the fact that, even though they must know how much focus is on these kinds of events now, they still continue to do it.  Shoot first, ask questions later, even if the suspect in question is a kid, is unarmed, is running away in the opposite direction, was doing nothing or very little wrong in the first place, or a combination of any of those things.  They don't seem to care.  And given some of the stories that are coming out about internal communications among the police in several departments, there is very little doubt that extreme racism is behind many of these unjustifiable killings.  They don't care.  Some police seem to think that they are the judge, jury and executioner for something as minor as selling cigarettes without a tax stamp or being suspected of lifting less than $20 worth of merchandise from a convenience store.  This is really insane and it is even more insane that we are even having to point out how insane this is and then getting pushback from conservatives and "pro-police" people.

Our society has totally lost it and we don't even know it.  I am so despondent over this topic and I am an old white guy.  I have no idea how the black communities all over the country feel.  I would think "outraged" wouldn't even begin to describe it.  The local police are supposed to SERVE and PROTECT the citizens they represent.  They should not be at war with the local populations!  Dammit.  Yeah, I know, I am not saying that there aren't a lot of very bad people out there and the police need to be very careful when going out on patrol.  But that's their job!  Not every black person they encounter is a violent criminal just waiting to do them harm.  Some might be, say, an ex-tennis pro just standing in the wrong place and the wrong time.

SHIT!!!  I got myself pretty upset just writing this post.  There is something very wrong with our society right now and many people refuse to admit it.
Posted by zeppo at 8:14 AM No comments:

Does it seem like religious fanatics are getting more brazen these days?

And I am not talking about radical Muslims blowing up things with people in them or gunning down anyone who mocks Islam.  I am talking about the nutjobs here in the U.S. who just think they are the most oppressed minority that has ever been but at the same time, they think they can tell everyone who lives in this country that we must abide by their particular brand of religion.  This is getting incredibly worrisome.  I do not doubt for one second that, if enough people were elected to national office of that mindset, then we would find ourselves living in a religious theocracy in very short order, the Constitution be damned.  I am pretty confident that this won't happen, because there are enough people who see the danger and won't elect a President that thinks Christianity comes before Country.  But there are enough radical nuts out there that I won't say I am completely confident that this won't ever happen.

(This is one of those days where I just kind of hate dealing with people altogether...  People kind of suck.)

UPDATE:  Here is a good article in Salon talking about the mindset of these radical Christians we have in the country today.  It's pretty damn scary that they think their unique brand of Christianity allows them to disregard any law they don't like and to think they can just take over because their religion trumps our government.  No doubt we would have a Christianist theocracy if they ever gained power.


What Davis is asking for is not an accommodation at all, but for the right to declare, by fiat, that Rowan County, Kentucky, is a mini-theocracy not beholden to the laws of the land, but by the whims of Kim Davis. Her legal team wants you to see her as a sweet but faithful woman, but in fact she’s trying to pull a coup here, claiming that “God’s authority” — read Kim Davis’s authority — trumps our entire democratic system.

It’s not just her, either. Rena Lindevaldsen, who works for the Liberty Counsel that is handling Davis’s case, has taken to boldly arguing that Christians have the right to overthrow the democratically elected government and simply impose their will by fiat. “Whether it’s zoning or taxes or marriage or abortion, in those issues, government doesn’t have authority to say that these things are appropriate because they’re contrary to Scripture,” Lindevaldsen recently argued in front of Liberty University. Which is to say that even though the government has declared abortion legal, if you decide you don’t want your neighbors getting abortions, you should be able to declare yourself a God-appointed authority and simply shut it down. If you don’t want to pay taxes, declare yourself a “sovereign citizen.”

I have a question for that annoying clerk in Kentucky who won't do her job and anyone else that feels like she does.  Why do you think you get to decide who can get married or what the definition of marriage is?  Got news for you, babe.  Christians don't own the institution of marriage, even though you seem to act like you think you do.  Hindus get married.  Sunnis get married.  Jewish people get married.  African tribesmen get married.  Navajo Native Americans get married.  Atheists get married, for God's sake!  How in the hell do you think you can define marriage for everyone in this country?  Define it for yourself, why don't you?  But don't tell the rest of us that we have to follow YOUR rules based on YOUR PARTICULAR interpretation of a particular version of a particular Holy Book called the Bible.  And, you know all that stuff about four marriages and having kids by one father five months after you divorced a different man?  Maybe you should drop all that Holier Than Thou crap. 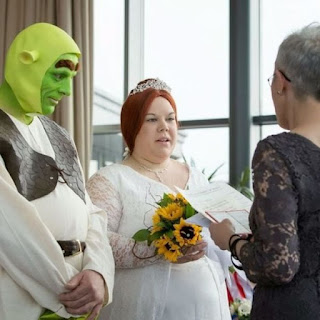