Worth 16 owls in the bush, but a bit difficult to carry. 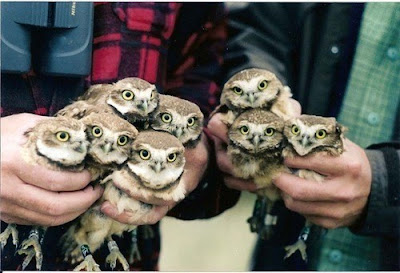 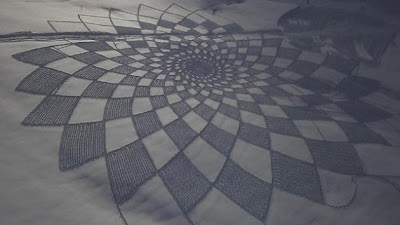 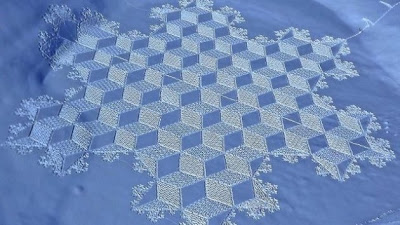 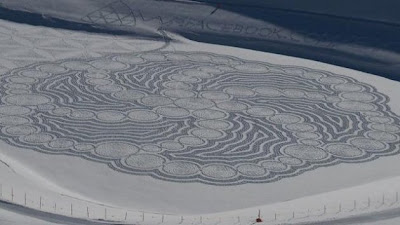 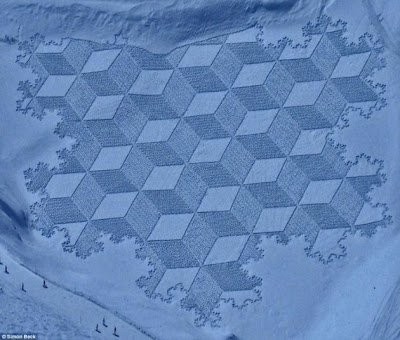 I always enjoy artist endeavors that are outside the norm but still very artistic. Here are some pretty fantastic designs drawn in the snow by Simon Beck.

Are aliens giving up cornfields for cold, mountain air?

Nope. Turns out these incredibly awesome snow designs are the work of decidedly human artist Simon Beck, who takes the concept of a crop circle to new heights by strapping on a pair snowshoes and getting to work.

"They are made by a kind of reverse orienteering," he explains on his Yahoo! Groups page. "The main lines and points are surveyed using a sighting compass (as used for surveying orienteering maps), with distance either by pace counting or string."

It can take Beck hours of trudging around in the snow to create his masterpieces, which can run the size of a soccer field. Why go to the trouble?

"The main reason for making them was because I can no longer run properly due to problems with my feet, so plodding about on level snow is the least painful way of getting exercise," he says. "Gradually the reason has become photographing them, and I am considering buying a better camera."

It would have never, ever occurred to me to actually do something like this....

See more of his work/trudging around in the snow on his facebook page here.
Posted by zeppo at 6:52 AM No comments:

Yet another right wing politician that feels “God has called on him.” 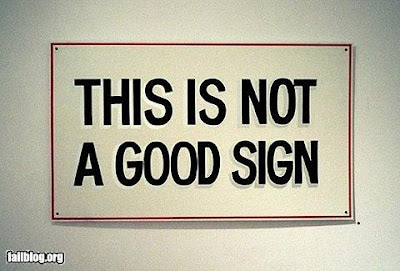 This one happens to be Craig James, ex-college football jock, taker of illegal payments to student athletes, and meddling dad who appeared to get a coach fired from Texas Tech by using his clout as ESPN analyst.

I could say all sorts of things about why someone like James thinks he would be a good Senator, but I will leave that to another time.

This is the line that caught my eye, however, right at this end of this article.

The Republican primary is scheduled for April 3, but it could be delayed depending on the outcome of legal challenges to congressional voting districts. A later primary would give James more time to raise money and promote his campaign.

James dismisses a suggestion he's considered a long shot and believes he was called by God to run for office.

"That doesn't mean God says, 'You're going to win, Craig,'" he said. "But I would far rather have done this than let God down and not do what he had called me to do."

I am just astounded about how many right wing politicians that claim God is in his or her corner. Michele Bachmann, Gingrich, Rick Perry, Rick Santorum, all have claimed at one time or another, that God had called upon him or her to run for office, which was really interesting, since it was the same Office of the Presidency that they were running for. God apparently can’t make up His mind.

But I find it astounding, if God exists and He created the entire universe, with its billions upon billions of stars and in which Earth does not even rate being called an infinitesimal speck, that He would care one single bit about whether or not one politician would or would not run for office of one of about 180 countries that inhabit the Earth.

Perhaps it just that these people overestimate their own importance. The monumental ego involved in even supposing that he could "let God down" is astounding. I got news for you, James. If there is a God, one that could create the entire universe and everything that resides within it, He does not give One Big Goddam about you, period. You are about as insignificant as an amoeba is to you. And I will tell you another thing. If you read sports blogs like SB Nation, no one liked you an a sports analyst or a color commentator. You sucked there, why do you think you would make a good politician? Oh, yeah. You can "criticize Obamacare."

These pricks really piss me off, with their sanctimonious hypocritical bullshit.
Posted by zeppo at 1:35 PM No comments: