I have no idea what Fox News thinks the are accomplishing anymore.

Fox News, back when it was new and relatively unknown, was really passing itself off as just another 24 hour cable news station.  In that guise, they could sort of be the "stealth Republican mouthpiece", because casual watchers might not really understand that they were getting a big spin on their news.

Now, however, it is all very, very clear about what Fox News is.   They will spin any sort of news they can to make President Obama and the Democrats look bad, even to the point of fabricating stories or taking individual sentences out of context.  They will puff up all sorts of stories that support their cause, like the Tea Party rallies, but totally downplay anything they deem to be "on the other side", such as the Occupy movement.  They will support Mitt Romney in the face of the unsupportable, e.g., his outrageous attack on President Obama DURING the attacks on the Libyan embassy and the consulate in Egypt and his ridiculous statements last week captured on a hidden camera video regarding the 47% lazy bums who will never vote for Romney and never take responsibility for themselves.

So, we all now know what Fox is doing and why.  But who are they talking to?  Their base really doesn't need any more fuel to keep their anger burning brightly.  They are already angry.  I seriously doubt that many undecided voters would be going to Fox to get their news to help them make up their minds.  If someone is going to Fox, I believe that their minds are already made up.  So, is it just money?  Is it just totally ideology driven, such that they don't really care that much about undecided voters or making money off advertising?  Is Roger Ailes so driven by hatred of Democrats, progressives and liberals, not to mention gays and lesbians, blacks, Latinos, etc., that that becomes his primary motivation?  Pure, unadulterated spite?

I know this is an overgeneralization.  There are probably a number of "reasons" why Fox News does what it does.  Maybe not really good reasons, but at least they might be rational ones when examined from their point of view.  But when they start having to rely on taking Obama quotes out of context that are 14 years old, what do they really think they are accomplishing?

I am not a psychologist.  I can only try to explain what I think are nonsensical human actions by my own point of view and hopefully, logic based thought process.  But I think that many people in today's society, and that does include some on the left as well, become so locked in to their own positions that they don't even care that they make sense anymore.  No logic is necessary, rationalization of their position is all that matters.  If they can come up with something, ANYTHING, that they can say to make their position seem to be the right one, then that is all that is required.

And when that happens to a society, it becomes vapor locked.  That is why we have Republican senators and congressmen who will never, ever vote for a bill sponsored by a Democrat.  It doesn't make any difference if they helped write it or if the bill represents a position that the Republican mainstream held during the Bush administration.  It doesn't matter.  All they know is that Obama and Democrats are evil and they can never agree with them.  On anything.  Ever.

So, where does that leave us as a country?  I have no idea, but wherever it is, it isn't good.
Posted by zeppo at 8:51 AM No comments:

Has anyone seen this TV ad for Five Hour Energy?


I’ve seen it a number of times.  It just has a lady in a pants suit sitting on a table next to a very tall stack of paper.  Her spiel, which I am paraphrasing, goes something like this.

"Have you asked your doctor about Five Hour Energy?  We did, and the results were AMAZING!  Fully 73% of doctors surveyed said that they would recommend a low calorie energy supplement to their patients who use energy supplements.  73%!"

There’s a bit more, but that’s the crux of this ad spot.

Gah, I can’t stand overt stupid in our society, and I hate it when advertisers just assume the viewers have the intellect of a persimmon.   I don’t suppose I need to point out to you, alert reader, about how inane this ad is.  The only thing that this “study” found out is that 73% (which actually isn’t that much to brag about) would prefer their patients, if they absolutely feel they must use an energy supplement, use a low calorie one rather than a fattening one.  Nothing about recommending an energy supplement in the first place, nothing at all about Five Hour Energy specifically….  When I asked my doctor once about one of those supplements for joint discomfort that has glucosamine and condrotin in it, he said something like, “Well, it can’t hurt you.”  That’s what doctors really think of dietary supplements for any reason.

I just find it fantastic, given how much money is involved in buying time on national TV for commercials, that this ad company expects a lot of potential customers to be convinced by this argument.  But perhaps, people really are swayed by someone who spouts a bunch of statistics that may sound impressive but are really out to manipulate the viewer.  Sort of like our current politicians.

Here’s someone else that finds Five Hour Energy ads to be stupid and potentially deceptive.

Ah, the wonders of the Free Market! 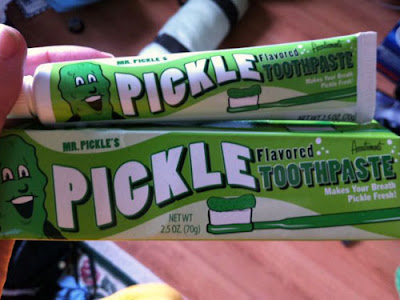 Yes, I know the free market is just like Darwinism, in that the weak and the fatally flawed quickly die out to be replaced by the stronger, but really....  Who thought this might be a good idea?