What does and does not upset Conservatives in America today.

So at an Obama fundraiser headlined by the First Lady, Robert DeNiro tossed out a moderately funny joke:

“Callista Gingrich. Karen Santorum. Ann Romney. Now do you really think our country is ready for a white first lady?” De Niro asked to cheers from the crowd. “Too soon, right?”

Yes, it was a joke, you see, because in 2008, a lot of people asked if America was ready for a black president. We’ve had 43 white presidents, and 42 white first ladies, you see, and we don’t tend to think of them as belonging to any race. It’s a reminder of selective race-consciousness. I’m typing this v-e-r-y s-l-o-w-l-y because some people don’t seem to get it.

Among the non-getters is Newt Gingrich, who has gone nuclear over the joke, and even tried to compare it to Rush Limbaugh’s sliming of Sandra Fluke:

“I do want to say one thing, both on behalf of my wife and on behalf of Karen Santorum and on behalf of Ann Romney — I think that Robert DeNiro’s wrong,” Gingrich said. “I think the country is ready for a new first lady, and he doesn’t have to describe it in racial terms.”

Gingrich went on to demand that President Obama apologize for the comments.

“What DeNiro said last night was inexcusable, and the president should apologize for him,” Gingrich said. “It was at an Obama fundraiser, it is exactly wrong, it divides the country. If people on the left want to talk about talk show hosts, then everybody in the country should hold the president accountable when someone at his event says something that is as utterly and terribly unacceptable as what Robert DeNiro said.”

Inexcusable.... Yep, that certainly is Inexcusable. But Gingrich wants an apology anyway, from the President, who had nothing to do with the joke in the first place.

And here is something that apparently doesn’t bother Conservatives at all.

Just moments before Trayvon Martin was shot and killed, he was on his cellphone talking with a 16-year-old girl. For the first time, the girl is speaking out about the last, horrifying moments of Martin's life.

"He said this man was watching him, so he put his hoodie on. He said he lost the man," the girl told ABC News. "I asked Trayvon to run, and he said he was going to walk fast. I told him to run but he said he was not going to run."

According to accounts gleaned from 911 audio recordings made the night of the killing and the teenage girl's statements, Martin eventually did run. But Zimmerman wasn't far behind, and soon the two would be face to face. Zimmerman, the self-appointed captain of the neighborhood watch, was armed with a 9mm pistol. Trayvon had little more than a bag of candy in his pocket.

The line went dead, according to the girl's account.

It’s apparently fine for a white guy with a gun and a history of calling the police every time he saw a “scary black person”, essentially stalk, initiate a confrontation, and then shoot a black 17 year old kid who was armed with nothing more than a box of skittles, and then claim “self-defense” and the laws of the state of Florida are perfectly fine with this. But lord, have some liberal make a joke that has some racial component, and everyone has a grand mal seizure. But killing an unarmed kid who was walking home from the local 7-11? That’s apparently fine and dandy.

I am so sick of these fucking assholes. And I feel so sorry for the family of Trayvon Martin….

I just don’t know how these racist cretins can live with themselves.

UPDATE: Read this, from BlackSnob, for an up close and personal perspective on this outright murder of a black kid. And much as this angers me, I could never really understand it from a black person's perspective. This will give you one. Highly recommended read.
Posted by zeppo at 1:46 PM No comments: 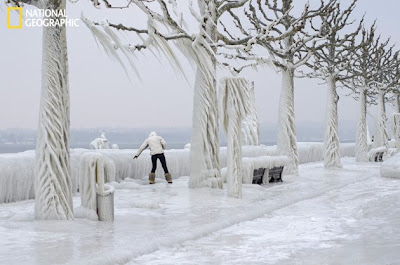 From National Geographic, natch.
Posted by zeppo at 10:38 AM No comments:

Rush Limbaugh is a truly despicable human being.

May I offer my apologies to all females in the world.
Posted by zeppo at 3:14 PM No comments: