Any bets as to when the Bush Administration tries to bring back the Sedition Act? 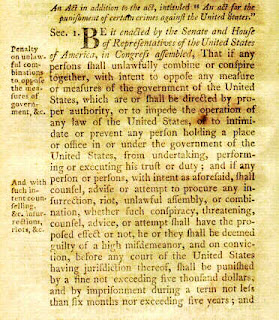 For those who may need a brush up on a history lesson from the nation’s somewhat sordid past, here is a bit from Wiki on the Sedition Act.

The Sedition Act of 1918 was an amendment to the Espionage Act of 1917 passed at the urging of President Woodrow Wilson, who was concerned any widespread dissent in time of war constituted a real threat to an American victory. This may have been due to "subversive activity" in Russia that resulted in the overthrow of the Russian Czar in 1917, and contributed to the Easter Rising in Ireland in 1916. "Subversive activity" in Great Britain was less successful.

The Sedition Act forbade Americans to use "disloyal, profane, scurrilous, or abusive language" about the United States government, flag, or armed forces during war. The act also allowed the Postmaster General to deny mail delivery to dissenters of government policy during wartime.

The Sedition Act was an attempt by the United States government to limit freedom of speech during a time of war. This is in conflict with the US Constitution's First Amendment, which states, in part: "Congress shall make no law... abridging the freedom of speech, or the press". Note that there is no "war" exception (or any exceptions whatsoever) to this freedom stated in the text of the amendment. The Espionage Act made it a crime to help wartime enemies of the United States, but the Sedition Act made it a crime to utter, print, write or publish any disloyal, profane, scurrilous, or abusive language about the United States' form of government.

Socialist Eugene V. Debs was sentenced to 10 years in prison under this law. U.S. citizens including members of the Industrial Workers of the World union were also imprisoned during World War I for their anti-war dissent under the provisions of the Sedition Act. Anti-war protestors were arrested by the hundreds as speaking out against the draft and the war was illegal under this law.

In his 1941 book Censorship 1917, James Mock noted that most U.S. newspapers "showed no antipathy toward the act" and "far from opposing the measure, the leading papers seemed actually to lead the movement in behalf of its speedy enactment."


So, for those of you who still may be under the impression that, even though Bush and his gang of Constitutionally impaired thugs are currently running amok, things can’t get too out of control before they somehow automatically self correct, you may want to consider what happened to this country during the time that the Sedition Act was imposed.

The country had recently been stampeded into a war with Spain, that really benefited no one other the industries dedicated to manufacturing war materials and those who desired to further this country’s colonial ambitions (re., Guam, the Philippines, and Puerto Rico). This was done by constant warmongering by, among others, the part of the press controlled by William Randolph Hearst. An incident that most investigators now believe was purely an accident was used to further inflame the population when the battleship U.S.S. Maine blew up in a Cuban port, which made war with Spain all but inevitable.

World War I came along and, for a time, the United States was able to refrain from being involved in the actual fighting. But, when we did become involved, we went all-out, both in war and with controlling the population of this country. First came the Espionage Act of 1917. That made it illegal for a person to convey information with intent to interfere with the operation or success of the armed forces of the United States or to promote the success of its enemies. You could get 20 years in jail for that, plus a monetary fine that was in excess of a several hundred thousand dollars in today’s money.

Not being content with that, the Sedition Act was passed the following year. Anyone uttering or printing a word of dissent against the war effort could now be arrested or fined. The Post Office could legally withhold your mail from you. Think on that for a bit. If you uttered anything that could be construed by anyone to be disloyal, profane, scurrilous, or abusive language about the United States' form of government, you were a criminal. It is also noteworthy that this action apparently had almost full support of the newspapers of the day, even though this was in direct conflict with the First Amendment to the Constitution.

This is about as far “out of control” as our democracy can get without becoming something else entirely, although the forced relocation and internment of American citizens of Japanese ancestry during WWII is either on the same level or even worse.

Now, go back over these last few paragraphs and compare them to what has transpired over the last six years. If you sort of lump the Spanish-American War and World War I together, this resembles, to an astounding degree, the country as it is today.

Do I have any doubts that the Republicans would like to attempt something like the Sedition Act today? None at all. What would their definitions of “disloyal”, “profane”, “scurrilous” and “abusive” be? No doubt, whatever suited their needs at that particular moment. Would the news media and a large percentage of the population support these measures? If you were to ask these questions about four years ago, I would say, without a doubt in my mind, yes.

Although I am a bit amazed to find myself actually writing this down, we all may have been handed a lucky break that the Bushies have turned out to be so absolutely incompetent at pretty much everything they attempt. These people probably have trouble installing a new roll of toilet paper in their bathroom dispenser. Just imagine how MUCH more damage these people could have done to this country if they had gone about their plans for the entire makeover over the government of this country with any sort of competence and planning. I keep imagining a government like that of England in the future in the movie “V for Vendetta” (which is truly an astounding, thought provoking and thoroughly creepy film, if you haven’t seen it), where you had intelligent thugs that KNEW they are thugs and would do anything they can (including the murder of thousands of fellow countrymen) to get what they wanted. As much distain as I have for Bush and his cronies, I do not believe they have reached that level of malevolence and evil. These clowns are just that, clowns. Not that their intentions haven’t been despicable, they have. It’s just very fortunate for us, clowns usually aren’t the most capable of folk.
Posted by zeppo at 6:37 PM