Over thirty dead at Virginia Tech. The gunman was a VT student. 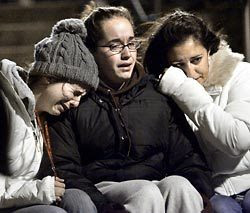 And the predictable firestorm over guns erupts amid all the grief around the country. I can’t imagine how the parents of those killed and wounded feel this morning. It’s one thing to have a son in the Army and know that he is in danger every day. How often do you worry about your son or daughter not coming home from a day of classes?


I am unequivocally pro-gun control. I just do not understand this national love affair that we have with guns. I don’t know if it is the wild, wild west machismo at work, or something else. Sure, there are hunters (which I also don’t understand, shooting small animals and birds for “sport”) who have legitimate uses for the guns they own, and they are law abiding people. But there are many, many people in this country who have guns, both legally and illegally, who absolutely should not have them. And we don’t seem to want to even have a discussion about this, and I can’t figure out why.

Guns are manufactured for one purpose only, to shoot to kill or injure another living being. Not always humans, yes, but they are a killing instrument, however you slice it. Yes, cars can kill, sometimes on purpose. Knifes can be used to kill. So can a piano dropped from a balcony, if your timing is very good and the victim has no peripheral vision. But all of these items have other, primary uses. Guns are the only commercially available product whose primary purpose is to kill or injure something.

My own perception on this is colored, to say the least. Although I feel I would have been pro-gun control anyway, I experienced an event which I will not easily forget back when I was younger. One night I came across my drunk, red-neck angry step father, who felt a burning need to take out his anger on his family, in the kitchen holding a loaded pistol on my younger brother. I was immediately sucked into this drama, as this is not something that you just casually turn your back on. He was raging about how he got no respect, and that he wanted us to “love him”. Yes, threatening to shoot someone is certainly a good way to engender love and respect. Wonderful idea. We both just talked him down, all the while he continued to waved the gun around, sometimes pointing it as us and sometimes not, and continually checking to see that it was indeed loaded, until he finally just passed out on the floor. We then took the gun and hid it. I don’t even remember what we did with it.

So, yes, I am predispositioned to a certain “viewpoint” in this discussion. I admit that. But, for the life of me, I cannot understand the part of this nation that freaks out when anyone even mentions tougher gun control laws. Some gun advocacy group, don’t know which one, put out a statement yesterday even before the dead were officially counted, saying that the problem was not lack of gun control, but too much gun control. I take it their position is if everyone walked around armed all the time, then this would never happen.

Somehow, I doubt that. What I think would happen is that people out drinking in a dive on Saturday night, instead of getting in fistfights, would instead get into shooting matches. Road rage would become target practice on moving targets. Guns seem to give the owner a sense of power, of entitlement, and there are many that would not hesitate to use that power and entitlement. Given how fast we, as a society, take umbrage at the slightest provocation, even unintentional, I would certainly not want to roam the streets while everyone nursing a grudge (and possibly a bottle) is now ready to shoot someone. And that is what it would be, there is no doubt in my mind. The lawlessness of Arizona and Kansas in the 1800’s would not hold a candle to the carnage that would ensue if these people got there way.

If you have any doubts about this, go monitor some of the comments at a right wing or prop-gun blog. You see all sorts of comments from those folks about how the Constitution guarantees their right to own a gun, membership of a militia not withstanding, in addition to the fact that they don’t seem to think too much about the rest of the Constitution, such as freedom of speech and freedom of the press. Many of the comments there are actually rather scary, as it sounds like their position is that their side has the guns, so in a “battle”, they would certainly win. Many comments seem to indicate that they would have no problems shooting the pro-gun control people. Seems to me that they just proved my argument. THAT is why I think many people should not be allowed to own guns. From what I have read, many police apparently think that this is not such a hot idea, either.

I got into a very quick discussion (three comments exchanged, and I didn’t check back for a possible reply) with Taylor Marsh at her web site yesterday. (See the link over at the right.) She’s a pretty liberal blogger and radio personality, very anti-war and pro-Hillary Clinton. I was surprised to see her post on the subject yesterday, that had a statement that went something like “well, once we get over the predictable call for gun control, then maybe someone will do something about this.” How weary, how callous, someone wanting to discussion gun control. I called her on that, saying I didn’t understand why we, as a nation, can’t seem to even have a discussion about the subject. Her position seems to be that criminals will always get guns, if they have a mind to it, so any discussion of gun control is nonsense. My response was “hey, if you can say that, they I can say, with equal validity, that we shouldn’t try to do any emergency planning or protection schemes, because a criminal with a gun bent on doing violence to others will be able to get around those schemes.” She didn’t respond to that, and all I got was a restatement that criminals will always get guns.

For the most part, I don’t disagree with that assertion. Yes, guns are here to stay, sad to say. I am a pragmatist by nature. It’s not any great shakes as a “life’s philosophy”, but it seems to serve me pretty well. So, I have no doubt that we are not ever going to be able to remove guns from our society. They are here to stay. If someone were to actually try, then we might have a general uprising of the population. No, I don’t think that is something that anyone wants to tackle. However, I just don’t understand why we can’t make it harder for people to get guns. There are all sorts of loopholes and ways around the laws. Anyone who really wants a gun can get one very easily. Why not make it more difficult? Especially handguns. Hey, rifles and shotguns I understand are hunting tools. Handguns, no. Handguns are meant to be concealable and to shoot people. You do not go deer hunting with a pistol. Make it harder to obtain those. What is the problem? Yes, you will not prevent all of these tragedies from occurring. But even if we prevent ONE such occurrence, prevent the next Columbine, prevent the next Virginia Tech, wouldn’t that be worth it? Ask the parents of those murdered yesterday what they think, if they can get past their grief to even comprehend the question.

But yet, people freak when we even mention gun control. The NRA is a powerful lobby, yes, but they are a lobby that represents the gun manufacturers, not most of the public. There is one group, I forgot the name, which started their own pro-gun lobby because they objected to the stance of the NRA on certain things. In my mind, the NRA is out of control. They apparently think, along with everyone else (including Mitt Romney) they are instrumental in electing presidents. Yes, they have a lot of clout. But this is ridiculous. In Seattle a number of years ago, a guy with several guns walked into the Seattle City Courthouse and shot his wife who was trying to get a divorce and her friend. Right there in the courthouse, with hundreds of policemen within 100 yards. The NRA actually came out against installing metal detectors in the courthouse, as a way to discourage coming in with a concealed weapon. How insane is that? They were objecting to metal detectors! In my mind, insane groups of people should not be instrumental in electing our politicians.

However, the NRA is not my biggest concern. No, I don’t get them, not at all. But they are predictable in their right wing tendencies. It is people like Taylor Marsh that I don’t really get. I agree with quite a lot of what she says about every other subject she blogs about. However, her argument about criminals always getting guns makes about as much sense to me as saying that there will always be drunks who climb into a car and drive when they are physically impaired, and innocent people will die as a result. So, given that there isn’t any guaranteed way of stopping every single drunk from ever climbing into an automobile, then we should just stop trying. It’s an impossible task. End of story. That is about as much sense as I can make out of her argument. It isn’t even worth the effort that, perhaps, might save another thirty innocent lives sometime down the road.

Yes, let’s work on being proactive. Watch for signs that someone is thinking about doing something insane. Listen to what a friend, co-worker, or fellow student might be telling others or posting on the web, and TELL SOMEONE if you have any suspicions. Better safe than sorry. But why are we not able to even have a discussion about tightening up easy access to weapons? Otherwise, it is going to be very predictable. Every so often, five to ten years if not a shorter period, someone will go off and kill a lot of very innocent people who were just going about their mundane lives. People will wring their hands over how terrible a tragedy this is, and it will be shoved aside in short order so we can concentrate on the next pressing issue, like Anna Nichol Smith.

I have seen some people say things to the effect of “why is it that people want to bring up politics at a time like this?” It is as if, in their eyes, you have just committed some unpardonable sin by trying to discussion gun control when events have shown that we really need that discussion. My response, which usually goes unnoticed or unremarked, is, why do you consider objecting to 30 plus innocent people being slaughtered in cold blood “politics”? I consider it a moral discussion, not “politics”. That is insulting, to say the least. Politics is what Karl Rove does to try to make this country into a one-party system. That is politics. Objecting to, and wanting someone to address, people being gunned down in cold blood is most certainly not “politics”. I am objecting to, and want someone to address, the issue of over 30,000 people killed and injured in this country every single year by guns. That is NOT POLITICS!

There are many things I detest about this country, and this insane love affair with guns is one of them.
Posted by zeppo at 4:24 PM