The Republican Party is melting down in front of our eyes. 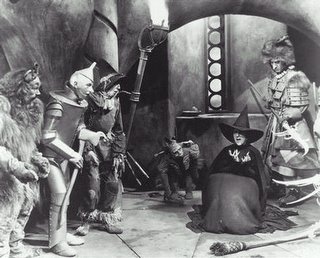 Just in the last week or two, we have had:

- In order to pander to potential voters, John McCain declare Baghdad to be safe, and to prove it, he went out shopping. Three blocks from the Green Zone, in personal body armor, with an escort of 100 soldiers and five helicopter gunships. When the media jumped all over this, he said he regretted his remarks, but “that’s life”.
- In order to pander to the NRA, Mitt Romney declaring that he has been a lifelong hunter. Only, it turns out, he was hunting all of twice, once in his teens and once at a shooting range where they raise pheasants and other birds just for the purpose of being released into the waiting gunfights of “big time hunters” like Romney. I suppose this qualifies as "all his life", but I don't think that is exactly what the pro-gun good ol' boys are looking for in a candidate.
- In order to pander to his ever shrinking pro-war, anti-everything-liberal base, Dick Cheney declares that there was a substantial relationship between Al Queda and Saddam Hussein in Iraq before we invaded. The only problem is that the administration’s own CIA agency came out on the same day and said, unequivocally, that there was not any such thing.
- In order to pander to the ever shrinking Republican base, George Bush goes out and savages Nancy Pelosi for journeying to Syria and engaging in dialog. It doesn’t matter that four Republican congressmen were with her, who said that Ms. Pelosi stuck to the administration’s line and who were ever critical of how Bush has been playing this. She also played messenger between Syria and Israel, injected some much needed contact between those two arch enemies.
- Bill O’Reilly goes nutso on his own show when Geraldo Rivera challenges him and doesn’t back down on how Bill views the immigration debate in this country.

What is even stranger is that they don’t even seem to be aware of how complete this meltdown is becoming. “All is well!” It’s getting rather pathetic, actually.
Posted by zeppo at 7:41 AM