You know, I have wondered about the effects of cell phone radiation. 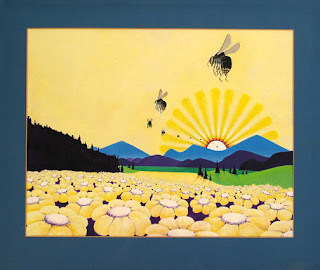 Our love of technology and “life’s little conveniences” may be striking us again. Not content with melting the polar icecaps and turning vast expanses of our world into a dustbowl, we now seem to be undercutting one of the major legs in food production (that is, bees pollinating our crops) with cell phone towers. Now, I use the words “seem to be” purposely, as the jury is not even in session on this one yet. This is just a preliminary assessment.

From the U.K. Independent, from HuffPost:

It seems like the plot of a particularly far-fetched horror film. But some scientists suggest that our love of the mobile phone could cause massive food shortages, as the world's harvests fail.

They are putting forward the theory that radiation given off by mobile phones and other hi-tech gadgets is a possible answer to one of the more bizarre mysteries ever to happen in the natural world - the abrupt disappearance of the bees that pollinate crops. Late last week, some bee-keepers claimed that the phenomenon - which started in the US, then spread to continental Europe - was beginning to hit Britain as well.

The theory is that radiation from mobile phones interferes with bees' navigation systems, preventing the famously homeloving species from finding their way back to their hives. Improbable as it may seem, there is now evidence to back this up.

Colony Collapse Disorder (CCD) occurs when a hive's inhabitants suddenly disappear, leaving only queens, eggs and a few immature workers, like so many apian Mary Celestes. The vanished bees are never found, but thought to die singly far from home. The parasites, wildlife and other bees that normally raid the honey and pollen left behind when a colony dies, refuse to go anywhere near the abandoned hives.

The alarm was first sounded last autumn, but has now hit half of all American states. The West Coast is thought to have lost 60 per cent of its commercial bee population, with 70 per cent missing on the East Coast.

That’s a lot of bees to be going missing. If 60 to 70 percent of anything in a stable ecosystem goes missing, it is bound to cause some major upsets. Once again, though, I don’t see our society giving up a single piece of technology if it is helpful and some very large corporations can make massive amounts of money on it, even though it may turn out to have some very serious, negative consequences. Doing so would mean, once again accepting some unpleasant news about ourselves, which we seem loath to do. Nothing, absolutely nothing, is ever our fault in the eyes of many in this country. And by giving up something we currently have would mean defeat for us. We are never, ever supposed to go backwards. Onward and upward. More and more. Better and better. Easier and easier.

Well, I suppose that if everything hits us all at once, that is better than drawing it all out over a period of hundreds of years. It looks like to me we are going to run out of cheap, plentiful fuel about the same time climate change will make it very difficult to produce enough food and water for the population. The loss of the bee population is just one more link in the chain on which our society exists that is rapidly falling to pieces.

(Painting "The Bees" courtesy of J. Bartley)
Posted by zeppo at 6:49 AM