A Music (and Political Statement) Review: Norah Jones/not too late 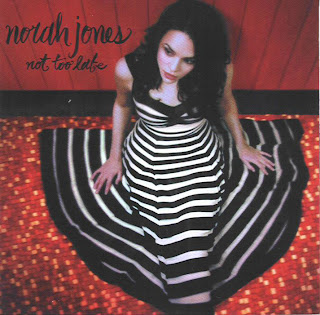 I bought a bunch of new music this last week. Some of my “new” CD’s are actually quite old, in terms of when they were released. But they were new to me. One of my choices was actually a rather recent release by Norah Jones. It’s very nice stuff. One of the things I like about her music is that it is so compact and uncluttered. She does some fantastic things with just her piano, her voice, and minimal accompanying instruments such as a bass, guitar, and background percussion. Her compositions are extremely nice, and she has quite an interesting voice, something of a bluesie/mellow jazz throwback. I would highly recommend this one.

I was listening to it through some headphones while working this week, and I wasn’t quite paying attention to the lyrics. But a song titled “my dear country” sort of broke through my attention to whatever I was doing at the moment. I certainly wasn’t expecting a political statement out of Norah. But this one, without really mentioning the current political situation or our current batch of thugs who currently hold the reigns of power, is very damning. Now, given, since they don’t get into specifics, I suppose someone on either side of the political spectrum could assume she was talking about the “other side”. However, I believe I know who she’s talking about.

I thought I would reprint the lyrics here. If you get the chance, give this one a listen.

I love the things that you’ve given me
I cherish you, my dear country
But sometimes I don’t understand
The way we play

UPDATE: Well, this is something I hadn't expected. Norah Jones is the daughter of Ravi Shankar, the sitar playing 1960's inspiration for George Harrison in his eastern mysticism days. That is a connection I never would have come up with, but pretty interesting, yes?
Posted by zeppo at 8:57 AM