An emotional rant intended for an American audience only, and only those interested in NCAA football. All others, proceed cautiously while yawning. 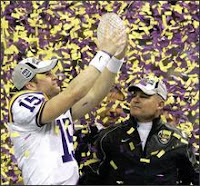 The NCAA “National Championship” game was held this week in New Orleans, which, if I am not mistaken, just hosted the Sugar Bowl a little over a week earlier. In summation, LSU won, Ohio State lost again, for the second time in two years, and, outside of the states of Ohio and Louisiana, no one really cared. Big deal. Try telling the University of Southern California or the University of Georgia that LSU has a better football team. Heck, even the University of Missouri. This game really proved nothing. In fact, it was a complete and utter “don’t care”.

Listen up, NCAA. College football is supposed to be over on JANUARY 1st!! Just because you, the major television networks and the “BCS conferences” have figured out that you aren’t competing with yourselves when all the major bowl games were held on New Year’s Day, it doesn’t mean that people really give a flying fig about a game that is held over a week after everyone else has gone home? And on a Monday night? Sheesh. Can you say “anti-climactic”? Or perhaps, “post-coital depression”? If last night’s game really and truly was “for all the marbles”, then why did we all waste our time on those 26 other bowl games, or whatever it was, in the last month? Those meant nothing?

Even the name, “BCS National Championship Game” sounds hokey and totally bereft of any magic at all, when placed next to “The Rose Bowl”, “The Orange Bowl” or “The Sugar Bowl”. Those games have history and pageantry. Their very names invoke a certain mystique. They have an aura about them. The BCS National Championship Game is a cheap invention, “the big con”. It embraces all that is bad about the NFL Super Bowl, and has none of the benefits of being the final game after all the other pretenders to the crown have been dispatched. For your information, HALF of the teams playing in bowl games ended their season by winning their games!

Either make this one way or the other. Either you institute a honest-to-God tournament, like the DII and DIII playoffs (and I refuse to use that utterly insipid name the NCAA has foisted upon them, when even all the television commentators have given up and call them “the divisions that used to be called DII and DIII), or else go back the way it was, where all the bowl games mattered. Don’t pull this lame crap where we should all care about crowning one particular team National Champions, where it is all such a transparent farce.

The NCAA “Bowl Championship Series”. To me, it’s just another demonstration of the ruling class in our society pretending to address what was really an issue for many people (i.e., the lack of a true champion in NCAA DI football), but only coming up with something that just puts more money in the pockets of the people and institutions that already have lots of it already.
Posted by zeppo at 6:42 PM