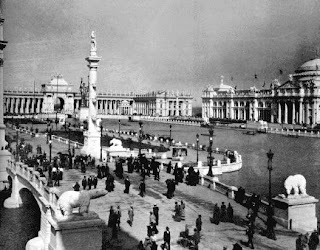 The years in America after the Civil War and prior to World War I saw a huge change in this country, for the good and the bad. The Gilded Age puts to shame the excesses we are seeing in this country today. But, many good things came out of those times as well.

The World’s Columbian Exposition in Chicago in 1893 produced several of these changes, or else set the direction for changes to come. Additionally, it produced just some really interesting and odd things as well.

- Electric power was in its infancy. Two types of electric power were still vying for supremacy; AC (promoted by George Westinghouse, whose design came from the inventions of Nikola Tesla) and DC (promoted by Thomas Edison and the General Electric Corporation). Both bid for the contract to supply power to the fair. AC power won out, unknowingly setting the standard for the rest of the country for the future.

- When the time before the fair’s opening was getting short, the unions working construction for the fair knew they held the upper hand. Many of them went on strike for better pay and working conditions. After some initial resistance, the fair’s management relented and signed a new labor contract. This became the model for future labor/management relations.

- George Ferris’s unveiled his new design, the Ferris Wheel, with the intent of “outdoing” the Eiffel Tower, which was constructed for the World’s Fair in Paris a few years earlier. This first Ferris Wheel stood approximately 300 feet high and carried train carriage sized gondolas high above the fair grounds. Each gondola was equipped with its own small restaurant.

- Elias Disney worked at a laborer at the fair. He and his family were awestruck by the size and magnificence of the fair. Elias’s son, Walt, would later go on to pattern his Magic Kingdom after the Chicago Fair.

- Frank L. Baum visited the Fair and used it as a model for the Emerald City in his later book, The Wizard of Oz.

- New technological advances were introduced to the public, such as an automatic dish washer machine, Edison’s moving pictures, the first zipper for clothing.

It must have been a wonderful thing to see.