Talk of “climate change” no more. No, it’s a new Epoch for the Earth. 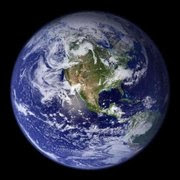 Say goodbye to the 10,000-year-old Holocene Epoch and hello to the Anthropocene.

Among the major changes heralding this two-century-old man-made epoch:

· Major disturbances to the carbon cycle and global temperature.

· Acidification of the ocean, which threatens tiny marine life that forms the bottom of the food chain.

Earth's 4.5-billion-year history is divided into major eras, then periods and finally epochs. The Holocene Epoch began after the last Ice Age.

As early as the late 1800s scientists were writing about man's wholesale impact on the planet and the possibility of an "anthropozoic era" having begun, according to Crutzen, who is credited with coining the term Anthropocene (anthropo = human; cene = new) back in 2000. That year, Crutzen and a colleague wrote in the scientific newsletter International Geosphere-Biosphere Programme about some of the dramatic changes:

"Urbanization has ... increased tenfold in the past century. In a few generations mankind is exhausting the fossil fuels that were generated over several hundred million years."

Up to half of Earth's land has been transformed by human activity, wrote Crutzen and Eugene F. Stoermer of the University of Michigan. They also noted the dramatic increase in greenhouse gases and other chemicals and pollutants humans have introduced into global ecosystems.

It appears that even some hardcore Conservatives are coming around to the view that things are changing rapidly, in some very dramatic ways. Yet, there is always going to be that 20 to 30% who believe that this is nothing more than a “liberal plot”. Usually, plots have some sort of goal, like the Bush administration hiding behind “executive privilege”, such that they don’t have to explain any of their underhanded actions to anyone. What the point of this supposed “liberal plot” might be, I have no idea.

Humans, as a species, can be incredibly stupid and short sighted. The Earth, in some form or fashion, will survive. It has through many, many changes in the past, and will no doubt do so in the future. However, whether or not the climate will provide a nice habitat for humans and our society remains to be seen.
Posted by zeppo at 8:49 AM