The Day The Earth Stood Still: Klaatu as a Christ figure? 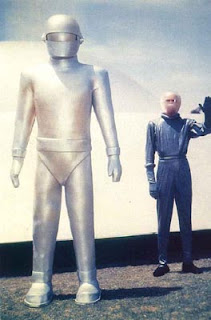 This idea was suggested to me a number of years ago on another web site I used to frequent quite often, of which all the contributors to this site, along with a couple of reliable readers, are alumni. Anyway, although it’s not quite in the same league as The DaVinci Code, it’s rather interesting for film buffs. These allegories were known the Robert Wise, the director, at the time.

Klaatu comes to Earth with a message of peace, but also a message of terrible retribution if this message of peace isn’t adopted. He is killed by the Powers That Be, who are afraid of his motives and what he might bring about. He is then brought back to life. When questioned about this by Patricia Neils character, Klaatu responds that the power of life and death is reserved only “the Almighty Spirit”. (This message was not intended in the original idea of the film, as it was imposed by a Production Code. They evidently thought that the idea of an all powerful, all knowing race was rather at odds with the idea of God being the only all powerful entity in the universe.) Klaatu, like Christ who cured the lepers and changed water into wine, exhibited extraordinary powers in causing all electricity around the world to stop. Even the name of “Carpenter” that Klaatu assumes while masquerading as a local inhabitant is reminiscent of the message of Christ.

It is difficult to determine just what to make of this allegory. Personally, I have never been too keen on allegory and symbolism. I tend to take things at face value. The Christ connection never occurred to me on my own until someone else pointed it out, just as the message in The Lion, The Witch, and the Wardrobe. Aslan as Christ never occurred to me. I work as an engineer and have training as a scientist. Clarity of information is paramount. Why anyone chooses to give a message by a method that is prone to personal interpretation, I have no idea. When I say this to anyone else, the answer I get back is, “That is the idea. What does it mean to you?” My answer back is, “I don’t know and I really don't care what I think. It’s YOUR story/movie/song. YOU tell ME what you intended. You obviously thought enough about your idea to put a lot of time and effort into it. I want to know what you intended. Why are you asking me to interpret something that you wrote?” To me, that’s just stupid. But then, I have found out that I don’t think like most people I know.

Therefore, it is difficult to reach any conclusions about what this Christ-like connection actually means in a sci-fi film from the 1050’s, when the concern those days was “The Red Menace”, “duck and cover” and building bomb shelters in your back yard. It is probably nothing more than an interesting idea that someone thought would make a compelling story, and as the film progressed, the more muddled it all became by other people in a position of power putting their fingerprints all over it.

My main concern about the message in this film is not the Christ connection. It is about the basic message that Klaatu delivered to Earth. “Become peaceful, or we will destroy you.” Talk about your basic contradictory message. “Do as I say, not as I do.” It just doesn’t really fit in with the concept of promoting peace and brotherly love. It is more of an ultimatum, not unlike that of the approach advocated by George Bush and Dick Cheney. “If we think you are threatening us, or even have the potential of threatening us sometime in the future, we reserve the right to annihilate you and to do so without a second thought.”

That is the message that I really have a problem with, in today’s politics or a sci-fi film.

More about this idea in contained in the IMDB entry for the movie, under “trivia”.
Posted by zeppo at 10:25 AM