This is hilarious, in a very ironic and depressing sort of way. 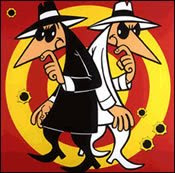 And now, today, we have word (via the NYTimes and lots of other blogs) that at least one of the telecom giants stopped their wiretapping activities, which may have well been illegal, not because they have had a change of heart, not because it was against the law, not because they realized their duty to the Constitution of the United States. No. None of those. It was because the FBI didn’t pay the telephone bills.

WASHINGTON (AP) -- Telephone companies have cut off FBI wiretaps used to eavesdrop on suspected criminals because of the bureau's repeated failures to pay phone bills on time.

A Justice Department audit released Thursday blamed the lost connections on the FBI's lax oversight of money used in undercover investigations. Poor supervision of the program also allowed one agent to steal $25,000, the audit said.

In at least one case, a wiretap used in a Foreign Intelligence Surveillance Act investigation ''was halted due to untimely payment,'' the audit found. FISA wiretaps are used in the government's most sensitive and secretive criminal investigations, and allow eavesdropping on suspected terrorists or spies.

''We also found that late payments have resulted in telecommunications carriers actually disconnecting phone lines established to deliver surveillance results to the FBI, resulting in lost evidence,'' according to the audit by Inspector General Glenn A. Fine.

Well, glad to see that the telecoms treat the government just as they would any other American citizen. No money, no service.

I do wonder how they are going to justify all those dead Americans, however.
Posted by zeppo at 6:54 PM

Labels: government out of control, technology