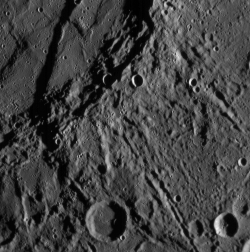 More knowledge about the solar system is being added in big chunks as the first spacecraft in some 30 years takes pictures of the planet Mercury.

I find this type of subject so fascinating. Humans, for as long as we have known about the existence of other planets, could only speculate about what they actually looked like in detail. Now we are finding out. I find exploration of space, by orbiting spacecraft, planetary rovers or telescopic observation (visible, x-ray, infrared, etc.) one of the more appealing things about our species. We now have the technology, as well as the will, to find out what our universe actually is.

There is speculation, no proof as of yet, that Mercury might have been a captured primordial body, similar to the one that collided with Earth during its formation and resulted in our Moon, and it did not actually form from accretion as did the other planets.

This is from NASA’s Astronomical Picture of the Day (APOD), a very cool web site indeed.

Two days ago, the MESSENGER spacecraft became only the second spacecraft in human history to swoop past Mercury. The last spacecraft to visit the Sun's closest planet was Mariner 10 over 35 years ago. Mariner 10 was not able to photograph Mercury's entire surface, and the images it did send back raised many questions. Therefore, much about planet Mercury remains unknown. This week's flyby of MESSENGER was only the first of three flybys. Over the next few years MESSENGER will swing past twice more and finally enter Mercury's orbit in 2011. MESSENGER is currently moving too fast to enter orbit around Mercury now. The above image was taken two days ago during MESSENGER's flyby and shows part of Mercury's surface that has never been imaged in detail before. Many more MESSENGER will hopefully help scientists better understand how Mercury's surface was formed, and why it is so dense.

The following text and picture at the top is from the Johns Hopkins Applied Physics Laboratory web site.


Just 21 minutes after MESSENGER’s closest approach to Mercury, the Narrow Angle Camera (NAC) took this picture showing a variety of intriguing surface features, including craters as small as about 300 meters (about 300 yards) across. This is one of a set of 68 NAC images showing landscapes near Mercury’s equator on the side of the planet never before imaged by spacecraft. From such highly detailed close-ups, planetary geologists can study the processes that have shaped Mercury’s surface over the past 4 billion years. One of the highest and longest scarps (cliffs) yet seen on Mercury curves from the top center down across the left side of this image. (The Sun is shining low from the right, so the scarp casts a wide shadow.) Great forces in Mercury’s crust have thrust the terrain occupying the right two-thirds of the picture up and over the terrain to the left. An impact crater has subsequently destroyed a small part of the scarp near the bottom of the image.
Posted by zeppo at 7:47 AM