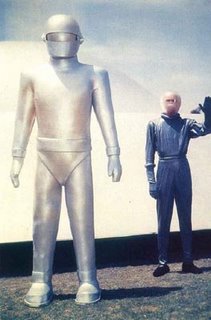 As it is Halloween evening, I’ll take a break from ranting about politics for a bit. I am really getting into a rut. So, I’ll talk about one of my other favorites subject, films.

Because of my training and employment as an engineer and scientist, I tend to analyze a movie to death. The first time I see a film, I usually just sort of “go with it” as the filmmaker probably intended. But on a repeat viewing, I’ll sit and go “Wait a minute, didn’t this just happen? So, what’s up with this new thing here? That doesn’t make any sense.” Or, “Now, that was really a cheap trick there, that wasn’t necessary.” In other words, I am an overly anal retentive, overly analytical engineer. (When you get right down to it, is there any other kind?)

One of my favorite sci-fi films is THE DAY THE EARTH STOOD STILL. It’s still a classic, although I wonder how it could have been directed by the same person who did THE SOUND OF MUSIC and WEST SIDE STORY. Here are some of the things that occurred to me when watching it for about the fourteenth time. O.K., I’ll admit up front that most of these can be attributed to “artistic license” or “the need to advance the plot regardless if this makes sense or not”. Still, these things bug me as obvious discontinuities.

Anyway, here’s the deal. A flying saucer from somewhere in outer space has landed on the mall in Washington D.C., rather close to some very special national landmarks. There’s a large robot standing there that has already evaporated a number of jeeps and tanks with his death ray. An alien, whose intentions are as yet unknown, is on the loose in the city after having escaped from Walter Reed hospital. Yet, at night, there are a total of TWO soldiers standing guard at the ship, and there are absolutely no gawkers around checking out this once in a millennia event!?! Where’s the National Guard? The Army? Multi-departmental civilian force? If an interplanetary spaceship complete with giant robot just landed in my city, I would be standing there taking pictures and checking that thing out, no matter the time of day or night. But there’s a total of two guards with a couple of rifles just standing around like some sentries at a desolate Army barracks somewhere in the middle of Montana! Weird.

Next, after Klaatu was shot by the Army and his body was being held in some downtown jail, Gort the giant eight foot tall robot is able to stroll through downtown Washington D.C., find the jail, blast a hole in the prison wall with his death ray, grab Klaatu’s body and then walk back to the spaceship, all without anyone ever seeing him!?! I don’t think so. If nothing else, someone should have at least tried to mug him.

And what was Klaatu’s ultimate message that he had to deliver to all mankind? “Don’t be violent, or we’ll blow you up.” Wow, that’s a real uplifting message, although just a tad on the hypocritical side. It is rather a one-sided version of the Cold War’s philosophical approach of Mutual Assured Destruction. I suppose if it works for the rest of the universe….

One of my later thoughts about the film is that, given what I know now about computers and how they are continually screwing up, crashing, and doing things that generally you would prefer they not do when you are in the middle of entering vast amounts of data in a multi-dimensional spreadsheet, I would be really hesitant in putting the fate of all civilized worlds into the hands of a bunch of all-powerful robots who can never be turned off. More than likely, we would instead end up with HAL, the psychotic computer with a persecution complex, only this time he would have his own spaceship complete with weapons that could vaporize the Earth or any other planet whose inhabitants accidentally entered an incorrect keystroke and caused a system crash.