The wit and wisdom of Mystery Science Theater 3000, as it applies to the administration of George W. Bush 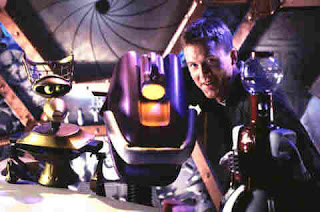 With thanks to the Internet Movie Database.

Mike Nelson: I'm sorry, clearly you're not a psychopath.
Tom Servo: That's right! Now get out before my dog orders me to shoot the president!

Dr. Forrester: Oh, hello boobie. Say, do you want to make people's heads explode? Sure, we all do.

Crow: Clowns. Terrifying in any country.

Joel: You sound like a manure salesman with a mouthful of samples.

Tom Servo: You have my word of honor that the story I have been telling is the truth... Okay, mixed with a little fiction... Alright, I'm lying my butt off...


Joel: You know, this has all the continuity of a fever dream.

Tom Servo: Geeze, I hope this works or little Billy will be lunch meat.

Joel: It's a pity we can't kill you and get away with it.

Tom Servo: It's just a simple matter of "What the hell is going on?"
Mike Nelson: Ah. You clever bastard, so the editor is working with you.

Mike Nelson: You know, I'm a little vague on what you are talking about.

Mike Blackwood: There's no reason to fear the worst. All we know is that the plane caught fire and we lost radio contact.
Mike Nelson: But there's absolutely nothing to be worried about.

Mike Nelson: Apparently the story is none of our business.

[dozens of peasants are fighting to aid Deathstalker]
Crow: We are still fighting bravely for our vague goal.

Crow: I toast your sleaziness.

[singing]
Tom Servo: It's the devil's theme, his stupid little song, even though he's the embodiment of evil he's still got a goofy song, in his tights he brings death, despair, destruction and disease, now let's all join him. Devil.

[Starts snowing in movie]
Mike Nelson: This is how much pure cocaine you'd need to enjoy this movie.

Reverend: George wanted to go to the funeral...
Crow: But Baywatch was on.

Lisa: It looks like there was a war.
Tom Servo: You'll have to take my word for it, we can't afford to show it.


Tom Servo: The sad thing is, they're trying to tap dance. Hahahaha. Kill me.

Crow: That was an official thing I just did.

Tom Servo: Believe in magic, or I'll kill you.

Teenage boy: Mr. Miller, is something wrong?
Crow: Sit down, pie-face. It's a long list.
Posted by zeppo at 2:33 PM