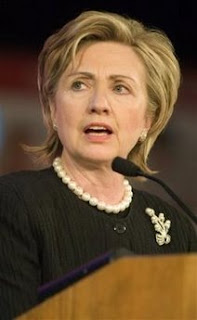 Boy, howdy. Hillary Clinton is really starting to sound.... Screechy. Petulant. Desperate. She has become a caricature of pretty much what everyone on the Republican/conservative side has been calling her since her husband was elected president. She really has started showing multiple personalities, one day saying how proud she was to be campaigning with Barack Obama and the next chastising him, saying “Shame on you, Barack Obama!” I really couldn’t believe it when I saw some short little video segments of her on the campaign trail on television.

Here is one of her latest, and believe me, just reading the text does not do this justice. When you see the clip live, her voice just reeks of sarcasm and derision.

Speaking to a crowd at Rhode Island College, Clinton said, "None of the problems we face will be easily solved," and then went on to mock Obama's message of unity.

“Now, I could stand up here and say, ‘Let’s just get everybody together. Let’s get unified,'" Clinton said to laughter of the crowd.

"The skies will open, the light will come down, celestial choirs will be singing and everyone will know we should do the right thing and the world will be perfect,” she said dryly as the crowd erupted.

So, she (and her increasingly out-to-lunch staff) has decided that a good campaign strategy is to mock people who hope for better than we have been getting in the last seven years from the Bush administration? THIS is a winning formula?

I know that politics change people, but it seems like one major lesson that Hillary ought to keep in mind is that people, for the most part, do not liked to be mocked. They do not like to be ridiculed. This is the kind of message that the Republicans have wielded to great effect in the last 25 years. If you want to draw in your base, to strengthen your position among people who are already pre-dispositioned to support you, then ridiculing your opponents is, unfortunately, a winning strategy. It plays to the “us vs. them” mindset that has taken hold of American politics.

However, what it doesn’t do is convince people who may still be making up their minds on the wisdom of your position. Mocking Obama’s message of hope and change, even though it is currently pretty vague, is not something that is going to change someone’s mind. Take me, for example. I was pretty much in Hillary’s camp when the election cycle was getting spooled up. I have heard her speak live and was very impressed. She is a very sharp lady, and knows how to handle herself. But given what has been going on since it became apparent that she isn’t going to get the Democratic nomination just by showing up, I have been very, very unhappy at the things that she has been saying and the underhanded politics that her team has been doling out. We are used to that from the Republicans, and that is one thing that this country is very sick of at present. Why are the Democrats going to nominate someone for the presidency who exhibits the same undesirable personality traits that we have been seeing from the Republicans for so long?

I want this to get over with. I can’t wait for the primaries and caucuses in Ohio and Texas. I want Obama to sew it up and Hillary to concede. She does not need to turn off any more voters on the Democratic label, and she doesn’t need to hand the Republican nominee a bag full of hammers with which to pummel Obama.
Posted by zeppo at 5:43 PM