A nation ruled by laws does not torture people, even guilty ones. 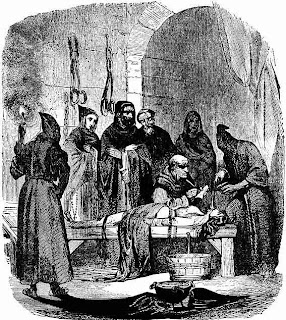 Thers at Whiskey Fire has a good post up which starts out talking about his recent stint at jury duty. He starts out by talking about just his experience in general but goes on to make some conclusions about our nation right now. I wholeheartedly agree.

Nations like ours that are supposed to be ruled by laws do not grab people off of foreign streets and toss them in hellhole prisons without ever accusing them of anything. They especially should not be offering bounty to someone like Pakistani warlords who have every motivation to grab some of their enemies or even innocent people off the street and turn them over to us to get some handing spending cash. They do not hold people who have not been accused of any crime, much less convicted, nor do they refuse them access to legal redress. Nations run by laws do not waterboard people, they do not confine people in tiny little cells where they cannot stand up or sit down, they do not sexually humiliate them, they do not deprive them of sleep, and they do not make them retrieve their food from toilets. I do not have the link right now, I may try to find it later, but I read that over 80 people have died while in captivity at Guantanamo Bay or in U.S. run prisons overseas. That may or may not include the numbers from prisons that we have subcontracted to other nations, who want in on this action.

Nations run by laws do not resort to weasel words in order to justify their position on “advanced interrogation techniques”. They do not find compliant lawyers to write up secret “legal” justifications to support all this activity and then do not show those justifications to anyone else. And especially, they do not have a President, when asked about this, that resorts to parroting the phrase, “We do not torture”, when by every indication that we know about, that is accepted in our legal system, that we used to condemn Japanese war criminals after World War II, and that is very clearly torture according to the Geneva Conventions, that all countries in this world that aspire to the label, “civilized”, have adopted and agreed to follow.

Whenever I think about this, I get extremely angry. We have people in the White House who plan these torture techniques and got tips by watching a television show.

A big deal was made last week of the fact that John McCain changed the name of the NFL team he told his Vietnamese captors about when being tortured. In his book and his earlier statements on the episode, in order to tell his Vietnamese captors subjecting him to torture to stop, he told them the names of the players on the Green Bay Packers instead of the real names of the other soldiers in his unit, including his commander. Much was made about the fact that McCain used that story to pander to the people of Pittsburgh when he was campaigning there by changing the team from the Green Bay Packers to the Pittsburgh Steelers. Yeah, that’s noteworthy; it says something about McCain's willingness to pander about what should be a very sensitive subject to him. But the press seemed to miss a very important aspect of this whole incident. McCain lied to his captors while being tortured!! Torture didn’t work for the Vietnamese!! We have, in about as obvious an example as you can find in a candidate running for President of the United States, proof that torture does not work. And that seems to be the only justification that anyone can offer these days about why our Constitution and core set of beliefs is being shredded these days. “What if a bomb was about to go off in 10 minutes and you have a person in front of you that knows where it is?” Jesus H. Christ. I don’t need to tell you how unlikely that scenario is, plus the fact that 10 minutes, even if you have the information, does not give you enough time to do much of anything other than kiss your ass goodbye. But what this implausible scenario does do is allow people who support torture to say, “what if this is that case?” Of course, it never will be, but “what it?” That is their only justification.

What if? Well, I have a bunch of other “what if’s”. What if the person is lying? What if he was innocent in the first place and doesn’t know anything?

One of the right’s rationalizations here is that the people who oppose torturing people, “are more worried about the rights of terrorists than they are the safety of the U.S.” There are so many things wrong with that assertion; we shouldn’t even have to explain. I will say this, however. However horribly we are treating other human beings that may or may not have anything to do with the actual reason they are being held in the first place, what concerns us more is what this whole issue is doing to us. Us! This isn't about "the terrorists". It's about us!! Our government tortures people, lies about it, and calls anyone who disagrees with these actions “traitors”. These are the actions that could be expected of the worst rogue nations, such as East Germany and the Soviet Union. These are the standards to which we hold ourselves? How about the Spanish Inquisition? We have sunk this low.

I am truly, truly ashamed of the actions of this country, all in the name of “keeping us secure”. Delusional bullsh*t. That’s what that is.

Drawing from here.
Posted by zeppo at 9:02 AM