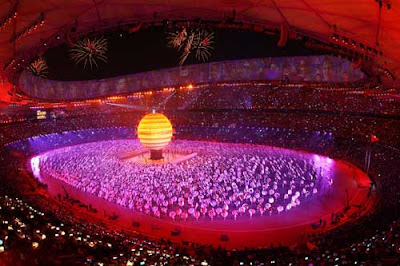 I, frankly, have never seen anything quite like that. That was truly amazing. If you saw them, you know what I am talking about. If you didn't, then words are not going to convey how spectacular those images really were.

I would also like to take this opportunity to, once again, complain as loudly as I can, about how NBC treats both the opening and closing ceremonies to the Olympics. The announcers feel that they need to give running commentary the entire time! I hate that! I cannot express how much I hate that. Most of it was inane, to boot. It added absolutly nothing, other than plaster noise all over the main attraction. They were just grasping for something to say, just to fill the "empty space". I actually just turned off the sound on the TV and watched the pictures without sound. I imagine that NBC feels they would need to provide running commentary if they were to broadcast a symphony or an opera.

Just STFU and let the audience watch and enjoy!! Yeah, you paid billions of dollars to broadcast these things, but that doesn't mean you have to insert stupidity into what was an awe-inspiring performance. YOU are not the focus. The Olympics are.