Republicans: Rioting the night after their team lost the NBA finals. 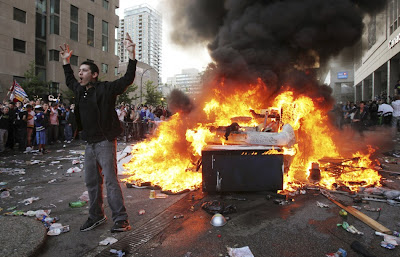 That my latest analogy to explain this madness. Republicans are still terribly, terribly pissed off because their team lost the NBA finals, aka Barack Obama won the 2008 presidential elections. They still cannot accept this reality, so they are really, really upset, and just to show everyone how upset they are, they are storming their own city (the U.S.A.) and proceeding to set cars on fire and throw anything they can find through plate glass windows. It won't stop the reality that their team lost, but it feels SO... DARN... GOOD!! It doesn't matter that those same people have to live in this country in the future. They are just out to show how awful it is that Obama is the president.

I hope that these white, elderly Tea Party types are really happy when they discover that their Social Security checks, the ones that they are either currently depending on or will in the very near future, are going to be for less than they were if they hadn't thrown their hissy fit.

(To be fully fair about this, that photo is from Vancouver, in Canada you know, after their team lost the NHL finals. But I thought that basketball is a bit more relevant of an analogy than is hockey, and a picture of a riot is a picture of a riot, regardless of the place or circumstances.)
Posted by zeppo at 1:46 PM