Self-identified Republicans prove they are nuts.

Markos ran a poll of “self identified Republicans” in order to actually have some hard data to back up what he has been saying. Here is a tabulation of some of the more interesting results. 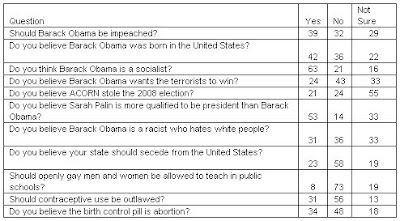 Over half of these people think that the 2008 presidential election was stolen. Half. By ACORN. A run-on-a-shoestring national advocacy group that helps minorities and disadvantaged people vote and get their voices heard in local politics. ACORN. Stole a national election. My God, the level of craziness in this is absolutely off the chart. You know, if I were a “self identified Republican”, I would think that they last thing I would want to be talking about is stolen elections.

Almost one quarter of the respondents believe that their state should secede from the union. Again, it would have been nice to ask their reasons behind this. They don’t like the current president? That’s the reason? That is what happened when Abraham Lincoln was elected and look what happened next. You would think people might have a few second thoughts about advocating something like this, yet there they are. It apparently doesn’t even matter that their preferred party might win the presidency back within three years. No, they want their state to secede, and they want it NOW. And the breakdown, which I saw in a different post, had the respondents in the old Confederacy states over 80%. The respondents in the northeast and west were slightly less insane on this question.

Only 33% of these respondents think that President Obama is more qualified to be president that is Sarah Palin. I just don’t even know what to say about that one.

In total, the results of this poll are very illustrative of why the two sides cannot have a substantive dialog about anything. We just have two very different realities. The two sides of this country are as far apart in how we view our reality as, say, the Israelis and Palestinians or maybe the Catholics and Protestants during the Irish “Troubles.”

I actually believe that there isn’t anything short of another World War or invasion from another planet that would pull the two sides together. Republicans and conservatives have decided that it is their duty to God and Country to vehemently oppose anything that President Obama and the Democrats are trying to do. Every single thing, even things that Republicans used to support (such as Pay As You Go, which requires Congress to cut spending by an equal amount to balance out any new spending proposals), they are now against, because their sworn enemy now supports it. This isn’t a policy. This isn’t even rational. This is pure craziness.

And thanks to Marcos, we now have poll results that prove it.
Posted by zeppo at 8:41 AM