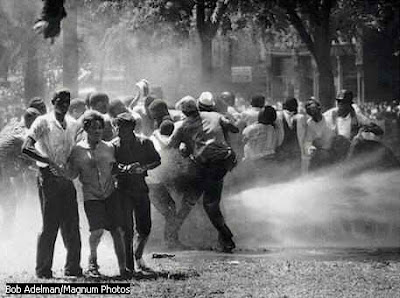 Beck is really insane. Or else he is so intent on playing to his insane base of hard-core listeners that he doesn’t care if he sounds insane or not to the rest of us.

How could anyone possibly connect Martin Luther King’s leadership during the Civil Rights movement here in the United States, where blacks were threatened with physical violence if they attempted to vote or sit in a diner or in the front of a bus? Where black churches were bombed and little girls killed? Where dogs and firehoses were use against demonstrators? What is it that Beck actually thinks is remotely similar to the manufactured outrage of white tea-partiers in today’s society? What, Glenn? Just what the hell are you attempting to do here? President Obama hates white people? Tea-partiers are just like the Civil Rights demonstrators?

Until I see police dogs ripping the shirts off unarmed white demonstrators and poll workers getting murdered because they were attempting to sign up white tea-partiers to vote, then, Glenn, STFU.