Hell is full of sludge, tar and oil. 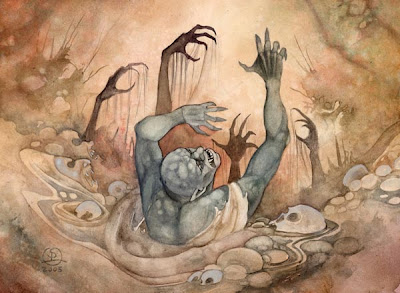 I hope this is the fate that awaits oil executives who deliberately press on with risky oil drilling adventures with no real idea what do to if something goes wrong, even if government regulations require such a plan. This is the place for those who deliberately require their workers to work around their own safety procedures, and for those who threaten to fire any workers cleaning up the horrible mess left if they wear any sort of protective gear or respirators while working in a toxic environment that could harm the worker's health. This is the place for those who pretend to have the authority to arrest people if they attempt to take pictures of the environmental catastrophe, even though the President of the United States specifically requested them to allow open access to reporters and photographers. This is for the executives that "earn" millions and millions of dollars but will find every single way they can to wiggle out of their responsibilities to pay for damages and loss of income to thousands of workers in the Gulf, even after they said they publicly said they would.

There is no Hell great enough for these rapacious thugs of the oil industry. However, as we have seen lately, what really happens is, when the spotlight gets too great, they retire to the English coast and go race their yachts.

There is no justice in this world.
Posted by zeppo at 10:02 AM