Who do conservatives hate? Mexicans or Muslims? I forgot.

They keep changing. For most of the summer, there was high hysteria about illegal immigrants and immigrants in general. It got to be where any immigrant was equated with illegal immigration. It was one big mass freak out where conservatives were howling about fixing the immigration problem, sealing the borders, building a fence, etc. etc. Mexicans were taking over ranches in Texas. Headless corpses were being found in Arizona. (Neither of which turned out to be true, of course.) Illegal immigrants were going to be the downfall of the United States.

Then came the uproar about the building of a mosque, which is really a community center with a swimming pool and a basketball court, at “ground zero”, which turns out to be two block away, further than a strip club and a couple of other, small mosques. That is now the freak out. People in Missouri, Wisconsin, Tennessee and California are so freaked out that there have been protests and violence against mosques in communities in those states, which are not even close to “ground zero.” 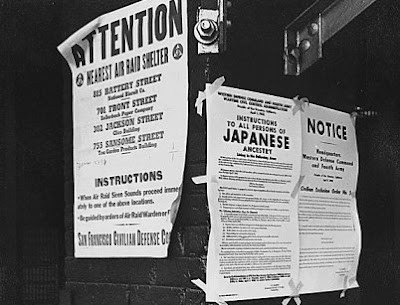 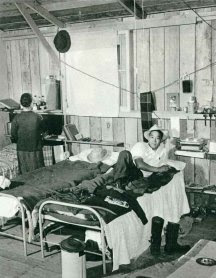 I was not around at the start of WWII. But this seems so much a replay of our fear, paranoia and xenophobia that occurred back in the 40's, after the start of the war. The Japanese Empire, being run essentially by the military, bombed our navel forces at Pearl Harbor. The national trauma and confusion was, no doubt, extremely high. We were hurt and wanted to hurt back. Luckily, there was the Japanese Empire sitting there, smirking at us. Declaring war on them was easy. But what else did we do? On the west coast of the United States, the government rounded up American citizens who just happened to be of Japanese heritage, made them give up all their belongings and forced them into internment camps. Let me repeat that. The U.S. government put American citizens, who had done nothing wrong except share some genetic heritage with our enemy, into camps. They were surrounded by barbed wire and guards with guns. Even small children were put away, all to help sooth our national hurt and suspicion of anyone who didn’t look like us. 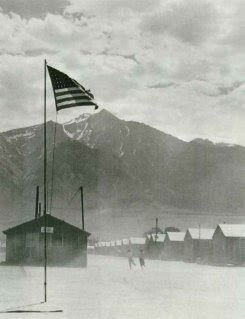 Did the U.S. put people of German heritage in camps? No. But American citizens of Japanese heritage were rounded up and deprived of their liberty. What was the difference? The real difference, in my mind, was that people of Japanese heritage DIDN'T LOOK LIKE US. They were strange, they were foreign. We were hurting after Pearl Harbor and these people, these American citizens who owned their own businesses, paid taxes, went to school, had sons in the military, looked like our enemy. Japanese = enemy. It was so easy, especially since it reinforced the thinking of many people anyway. If Germany had bombed our Navy in a sneak attack that killed thousands of people on a Sunday morning who were doing nothing more than just sitting around or going to church, whatever one does in Hawaii on a Sunday morning, would we have rounded up American citizens of German heritage? We will never know, but I very sincerely doubt it. Germans looked like us. Japanese people, even third generation American citizens, didn't.

What is going on now? People are now trying to equate anyone of the Muslim faith with a bunch of evil terrorists. People are being attacked because they are Muslims. Politicians who should know better are saying, in the national press, that there shouldn’t be any mosques built in the U.S., period. And, for the most part, these are the same people who adore the Constitution when it comes to the freedom to own and carry guns. Brown skin, thick accent, "strange" religion (i.e., not Christian or Jewish) is now equated with terrorists. Yes, let's all focus our anger and hatred of anyone who doesn't look like us at another group of innocent people! That's the American spirit! Kill the infidel before he kills us!

If the current crop of Republicans were in total control of the government right now, meaning the presidency and both Houses of Congress, do you think there might be a danger of the government trying to do the same thing to people of the Muslim faith, even though they are American citizens, that the government did to people of Japanese heritage back in the 40’s? Because, based on the rhetoric that I am hearing, that would be a distinct possibility. Once a mob mentality takes hold, it is very difficult to stop it. I find this very reminiscent of an old Twilight Zone episode, "The Monsters Are Due On Maple St." One line from that episode is very relevant in this discussion.

"You're standing out here all set to crucify someone! You're all set to find a scapegoat! You're all desperate to point some kind of a finger at a neighbor! Well, believe me, the only thing that will happen is we're going to eat each other up alive!"

Our country should be better than this.

Photos from here.
Posted by zeppo at 8:11 AM