Just not sure how anyone can look at this data and conclude that the US doesn't have a gun problem. 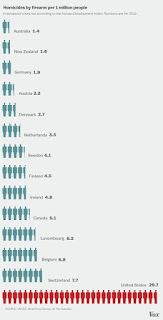 Of course, the favorite response of gun enthusiasts is "Guns don't kill people!  People kill people!"  OK, in a grammatical sense, that has a lot of truth to it.  But if that is true, then dammit, let's start doing background checks on PEOPLE before we let them have their weapons of choice in order to kill other people!  Get it?  We want to concentrate on people!  What is wrong with that, given what you keep saying?

The reality that graph depicts is just staggering, and it is even more staggering that we, as a nation, are in vapor lock and apparently cannot do a single thing about it.

There are many things I hate about our society, and this is pretty much at the top of the list.

(Sorry about the small size of the text on this.  I thought if you click on the graph, you would get another, larger version.  You do get another version, but it's pretty much the same size.  I guess you will just have to squint.  The important point is that the U.S. is on the bottom line and is MUCH larger than any other country on the graph....)