The Politics of Being a Raging Asshole. 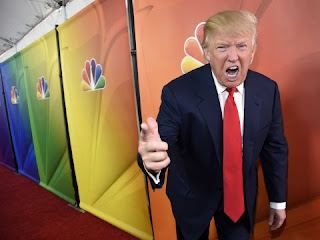 I am certainly not the only person in the U.S. that has this particular thought, but my theory about why Donald Trump is doing so well in the Republican president polling with conservatives is very simple.  They want someone to be an asshole.  They are angry and want someone to respond to people the way they want to respond to anything that displeases them this day, by being an asshole.  They enjoy it.  It gives them relief to vent all their pent up frustrations.  The bigger asshole someone is, they more it pleases a certain constituency of the Republican Party.  It gives them much pleasure to see people who they don’t like being called names, and the more insulting the name, the better they like it.

That is my theory about why Donald Trump is doing so well.  Yes, there are other candidates for the Republican nomination for President of the United States, such as Chris Christy (a gigantic asshole), Ted Cruz (ditto), and to a lesser extent, Rand Paul, who enjoys shushing female news reporters who ask questions he doesn't like.  But Donald has them all beat.

This would also go a little way in explaining what I think is just a remarkable phenomenon.  That is, why do so many “regular Joe and Jane” voters identify with Trump and call him “one of us?”  That is an astounding thing to say, given that Trump is a multi-billionaire with real estate holdings worldwide, is a reality TV star, and flies around in a private 757 with TRUMP emblazoned on the side.  How can anyone possibly think, “Gee, that Donald Trump is just like me”?  Well, given my theory, it isn’t much of a stretch just to think that what people are relating to with Trump is his ability to say anything he damn well pleases and gets away with it.  Of course, it helps when what he is saying totally agrees with the audience’s opinions.

It’s all a variation of the Bill O’Reilly, Rush Limbaugh, Laura Ingram, etc. approach.  The bigger and better insult you can deliver, they better the audience likes it.  It doesn’t matter if these Republican candidates don’t have anything to offer beyond “I hate Obama and everything he has ever done!”  Just so long as they can get their rocks off with good insults, they are happy.

And that might be what ends up electing our next president, and that scares the living crap out of me.

Another person voicing the exact same thing, in much better terms than I ever could.
Posted by zeppo at 10:22 AM