As Will Rogers once said, “Everyone talks about the weather, but nobody ever does anything about it.” 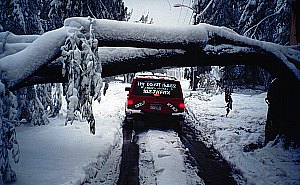 These last few years seem to have provided, and are still in the process of providing, pretty massive and dramatic weather patterns. We’ve just experienced deadly tornadoes in February in Louisiana and Florida, and huge snowstorms in the Midwest and East Coast after record warm temperatures. After the vicious year of a record number of Category 3, 4 and 5 hurricanes two summers ago, we then had hardly any the next year, with none of them making landfall in the United States. Here in the Pacific Northwest, we just experienced a very dramatic end of autumn/beginning of winter, with record warm temperatures, followed by torrential rain which spawned localized but sever flooding, followed by gale-to-hurricane strength windstorms which ripped down trees and power lines, followed by multiple snow events. Just in my short history here, I can see that this was a very unusual period of weather for us, which is normally just sort of gray, damp and dark.

Scientists cannot agree on a scientific basis by which these dramatic weather events could be directly contributed to global warming. However, there does seem to be a consensus that, whatever is going on, short term or long term, human activity seems to be making things worse. On a global scale, things usually change so slowly that humans are not even aware they are occurring. However, when something DOES happen which we can see, like an increase in the temperature of the oceans or the loss of massive ice shelves in Canada and Greenland, we can definitely say something is going on at a rather rapid pace (geologically speaking).

It seems to me that we should all get used to the unusual, when it comes to the weather. The Earth has been experiencing what scientists are saying is a rather prolonged period of very stable climate. We may be entering into a new period where “unsettled and dramatic” is the new norm. What this may mean for the next several hundred years is still being determined. However, in the short term, I would suggest that people have their insurance paid up, including flood insurance, cut down all the very large trees within reach of your house if they topple over and keep a snow shovel handy. It could be a very bumpy ride.
Posted by zeppo at 7:58 AM