Where’s Country Joe and the Fish when you really need ‘em? 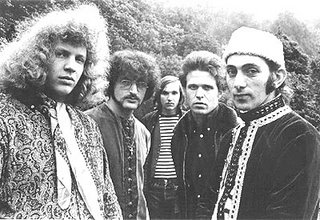 And it’s one, two, three, what’re we fightin’ for?
Don’t ask me, I don’t give a damn.
Next stop, it’s Vietnam.
And it’s five, six, seven, open up the Pearly Gates.
There ain’t no time to wonder why.
Whoopie, we’re all goin’ die!**

**Refrain from “I feel like I’m fixin’ to die rag”, in case you don’t remember Woodstock.

In some ways, Vietnam, as horribly confusing and terrible as it was, was much more straightforward than what the U.S. finds itself embroiled in today in Iraq. At least back then, we kind of knew who the enemy was. Oh, we couldn’t tell by looking at them, as they didn’t wear nice red coats and stand in straight lines while shooting at our troops, and they had the unfortunate tendency to go hide in jungles after an attack. However, that seems like a cakewalk compared to what is going on in Iraq today.

We don’t even know what our mission is. It seems to have changed about four times since the beginning. First, we absolutely had to go in and take out Saddam because he was ready to drop A-bombs and tons of anthrax on the U.S. within the next few months if we didn’t act right away. Next, when the WMD claims didn’t really pan out, it became the stated mission that we had to “rescue the Iraqi people from a murderous tyrant”. No arguing the “murderous tyrant” part, but when has that been the role of the U.S., to rescue nations from their government by military force? Then, it was to install a “democratic government” that was friendly to the U.S. Then, the mission became to rid the country of terrorists, or else they would follow our troops back to this country. Now, I have no idea what we are doing, and I am not alone. Are we there to police a civil war between the Sunni and Shia populations so they don’t slaughter each other? We don’t seem to be doing a great job of that, given that hundreds of Iraqi citizens are being killed each and every week. Terrorists? Can we even tell who they are or what they are trying to accomplish? Because, to me, it looks like the only reason the “terrorists” are there is to take potshots at the U.S. military. Insurgents? Is that the same thing as a “terrorist”, or something different? Are those the people who would just like us to leave their country, as they see the U.S. as an occupying power? Or, as George Bush himself alluded to several weeks ago, is it to secure the oil supply, because who knows what might happen if the terrorists might happen to conspire to drive oil prices up to several hundred dollars a barrel?

Quite a conundrum. What the hell are we doing there? What is our “mission” that Bush and Cheney keep harping on? How will we ever know if we accomplish that mission? If it is just a matter of making everyone stop shooting and blowing up our troops and helicopters with troops in them, then we could just leave. Then they would stop shooting at us. It seems like almost everyone has given up on the fantasy of installing an friendly, democratic government. Is that our “mission”? It certainly wasn’t when we went in. In fact, Bush, Cheney, and Rumsfeld were so dismissive of “nation building”, they did everything they could to NOT secure any part of the country after we destroyed all working governmental agencies. And we see how well that particular strategy worked out, haven’t we? The regular Iraqi people would certainly say that their lives aren’t better now than compared to then. Millions displaced from their homes, neighbors going around murdering neighbors, checkpoints on roadways designed to find Sunnis or Shias, so they can be dragged out of their cars and shot. Dog heads grafted onto the bodies of little girls…. We can’t even give them electricity for more than about 4 or 5 hours a day.

I think the Democrats have a good idea in trying to go back in and amend the original Congressional authorization to go to war. No one could ever claim, even Republicans, that they ever granted authority to the President to use the Army and Marines in the way they are being used now.

This is insanity in so many ways, I can’t even begin to summarize them. However, I am particularly incensed by how “Support Our Troops!” is still, to this day, being used to bash anyone criticizing Bush’s handling of the war, while troops are being sent into Iraq without proper rest, training, and equipment. And, when they are wounded, they come back to home to be subjected to horrendous conditions at Walter Reed hospital and other such facilities, if they get any medical and psychological assistance at all.