Why Fundamentalist Christians Hate Science. (Or, “Oh, dearie me. Whatever shall we do about all these pesky dinosaurs?”) 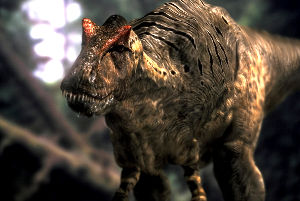 Not that this question is much of a mystery. The problem with science, and all logical thought processes for that matter, for Fundamentalist Christians is that the conclusions reached undercut some of the basic tenets upon which Christian dogma depends. This has been true for thousands of years, and will continue to be true. The problem, for Christians, is this. In their view of the universe, everything related to their faith is the Absolute Truth. The Absolute Truth can never change. It can never be wrong. It is inviolable. For them, if anything within their belief system is shown to be incorrect, then that, apparently, calls into question their entire belief system!

If the Absolute Truth happens to be written down, say, in a book called The Bible, then it becomes especially difficult to reconcile when facts start intruding upon The Truth. Written words are not as easily discounted and forgotten as verbal mythology. Therefore, in order for Fundamentalist Christians to avoid complete anarchy in their belief system, every single word in the Bible must be defended to the death, even when it means trying to explain away some very inconvenient and uncomfortable facts.

- Dinosaurs lived at the same time as man, and were carried by Noah on the Ark.
- Dinosaurs are probably alive today, we just don’t know where to look for them. (Yes, I agree, they are. Look in your backyard. They’re called “birds”.)
- Carnivorous dinosaurs had long, sharp, curved teeth to strip bark off of trees, because all animals, including carnivorous dinosaurs, were vegetarians prior to Adam and Eve being tossed out of the Garden of Eden.

I do not understand the Fundamentalist Christians’ obsession of late with dinosaurs. I suppose they finally came to the realization that they could not ignore the overwhelming evidence that dinosaurs once lived but are not around now. They just can’t explain away all those huge skeletons in museums around the world, so they just did their best in incorporating the past existence of dinosaurs into the belief system, intact, such that they didn’t have any pesky contradictions or loose ends regarding dinosaurs lying around.

One big problem with this approach, however, is that there are now a lot more scientific facts that would cause any rational person to doubt these assertions. For one thing, all of the geologic evidence and the fossil record show that these assertions to be complete nonsense. However, given the huge investment the Fundamentalist Christians have in defending their belief system from any and all inconvenient facts, they do what they do best; attack the messengers and say that all facts which don’t coincide with their world view are incorrect.

What the Fundamentalist Christians are doing here is just as blatant as if they were refuting the existence of dinosaur fossils. The only difference is that a big honking T. Rex skeleton staring down at you is pretty hard to ignore. The geological record is easier to ignore than the T. Rex. It involves actually understanding the subject, doing research, and coming to logical conclusions based on empirical evidence. So, rather than try to incorporate the contradictory evidence presented by the geological record into the belief system, the Fundamentalist Christians just say that scientists are wrong. Their proof? Their initial, totally unsupported postulation that, because the Bible contains only the Absolute Truth, anything that contradicts it must be incorrect. Therefore, if their initial argument is already accepted as the Absolute Truth, then the geological record must be wrong. Pretty neat trick, eh? The flip side of this approach is, anything that you say in support of the Absolute Truth automatically becomes part of the Absolute Truth.

(As an aside, I would really like a Fundamentalist Christian to try to explain Neanderthals. There is overwhelming evidence that cannot be refuted that they existed in Europe and the Middle East for thousands of years. Another fact that cannot be refuted is that Neanderthals were not humans. They were certainly related to us, but the bone structure makes it obvious that they were not us. However, it is easier for Fundamentalist Christians to ignore their existence, and instead focus on hoaxes such as the Piltdown Man, so they can say what idiots all scientists are. And who proved the Piltdown Man was a hoax? Scientists. I’m just saying.)

This entire discussion reminds me so much of how the Church reacted to Galileo’s theory that the sun did not revolve around the Earth, and therefore, the Earth was not (as the Fundamentalist Christians’ view back in the 1600’s maintained) at the center of the Universe. This was heresy in the eyes of the Church. In the eyes of the powerful Church elders, if this were true, then everything else they believed in also comes into question.

It’s funny how a few hundred years change people’s perceptions and beliefs. Back then, what Galileo was proposing threatened to undermine the entire basis of Fundamentalist Christian teachings. Now, due to the overwhelming evidence supporting Galileo’s proposal, everyone accepts the fact that the Earth indeed revolves around the sun and is, in actuality, a very small speck in the fabric of the universe. Has this new adjustment in thinking changed how the Fundamentalist Christians view the Absolute Truth? No, it has not. It has been incorporated into their paradigm. If anyone happens to dwell too deeply on why God might be so fixated on goings-on that occur on the Earth in the vastness of the cosmos, they are quickly hushed. But the entire concept now presents no insurmountable obstacles that stand in the way of the literal interpretation of the Bible.

The most ironic thing I find about the logical contortions that the Fundamentalist Christians go through is that they feel, somehow, that scientists are trying to disprove the existence of God. I have seen this in print several times. In my mind, nothing can be further from the truth. The basic reason that scientists probe the unknown is to try to figure out how the universe, and everything that it contains, works. It has nothing at all to do with the existence or non-existence of God. Why galaxies exist, what is the nature of sub-atomics particles, what killed off the dinosaurs, is there a way to predict earthquakes, all are questions being probed by science in one way or another. If a belief system desires to postulate that a Supreme Being is responsible for the existence of the universe and that all events within the universe are predetermined, the very nature of that postulation cannot be shown to be true or false by scientific evidence. It is a purely a matter of belief and is therefore not subject to scientific scrutiny.

What is open to scrutiny is when religion makes assertions about the physical nature of the universe. Science can, and does, make inquiries into the validity of these assertions. In many cases, religious assertions about the nature of the universe to not stand up to the bright light of inspection. But here is where I disagree with the Fundamentalist Christians’ conclusions. By disproving certain religious assertions about the nature of the universe, science isnot attempting to disprove the spiritual assertions of a religion. That is not the point. I would disagree with any scientist who is asserting that is what he or she is trying to do. Spiritual matters are not the purview of science. No matter my particular feeling toward organized, strictly interpreted religions in general, I will state that is should not be the business of science to try to prove something which cannot be observed or measured directly, and therefore, is outside the normal bounds of scientific inquiry.

However, Fundamentalist Christians have arrived at the opposite conclusion. In their minds, any inquiry into the nature of things that might possibly arrive at a different conclusion than what their personal belief system subscribes to is automatically taken as an attack against that religious belief system. Therefore, they must attack back, because scientists are “attacking them first”. This is, to put it politely, an immense load of cow flop. Yet, it seems to be the one and only thing that is holding the Fundamentalist Christian thought processes together. Circle the wagons, fight back, and never ask any introspective questions or entertain a moment of self-doubt during a time when your survival is under attack from a group of outsiders.

I cannot fathom this kind of thinking that actively tries to subvert, invalidate or ignore scientific inquiry. That is one thing, among many, that makes us humans. We constantly question what is the nature of the universe and how, as human beings, do we relate to that universe. I, for one, am proud to live in a time where we understand the basic structure of the universe. We have sent a space probe through the rings of Saturn and dropped probes on Titan and multiple rovers on Mars. We have concrete evidence that water, lots of water, once flowed freely on Mars. Within the next few years, we should have pictures of Pluto and its’ moon/twin planetoid Charon. We are probing the nature of matter down to the subatomic level. The universe is a wild, wonderful, amazing place that constantly surprises us. New, amazing discoveries are being made in all branches of science every day. Why should anyone consciously decide to close their eyes and ears to this, just because they feel the need to adhere to an unquestioning belief in a very old and oft-edited book whose origins are, at best, unclear?

I just do not understand willful ignorance.
Posted by zeppo at 4:41 PM