Ancient technology as exhibited by the Antikythera Mechanism. 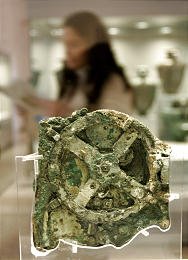 One of the more egocentric views of the world, including past civilizations, that our Western Civilization holds to is that our technology is far superior to anything that has ever come before us. Yes, that is a true statement in many respects. Our technology never ceases to amaze. Our scientists, engineers, and technicians continue to find new, amazing methods to do just about anything the human imagination can come up with. We can now peer into the bizarre world of sub-atomic particles with the help of giant particle accelerators. We can see photos beamed directly back to us from the surface of a moon orbiting Saturn. We have devised clever of looking inside the human body in ever-increasing detail, without the obvious and dangerous use of surgery. And “amazing” isn’t limited to the realm of the esoteric. Advances in computer science, materials, robotics, communications and transportation have given us the ability to achieve things that were regarded as science fiction as little as a single generation ago.

However, this ever-increasing upward spiral of technological development has skewed the way we look at other societies that do not possess such technology. We regard them as “backward” or “ignorant”. Technology feeds our smug little egocentric view of the world. “We are the best that exist now and the best that has ever been.” Never mind that 95% of the population of the United States has absolutely no concept about how some of these devices actually function, much less be able to design them or repair them, or that many of these advances were actually made by people other than Americans.

This disdainful view of other societies isn’t limited to present day. Our view of ancient cultures is also one of conceit. “The Romans didn’t have electricity, so they must have been backwards. Likewise, the Greeks, Chinese, Egyptians, Mayans, etc., etc. Certainly, they made some large pyramids and very nice buildings with beautiful carvings and ornate columns. But really, technologically advanced, they were not.” We have been shown so many pictures of huge pyramids in Egypt since we were young that we just “roll over” the fact that we do not really understand how the ancient Egyptians actually built them, how the two-ton stones were transported, shaped and then placed on a structure rising hundreds of feet in the air within a tolerance of tenths of an inch. We are clueless about how the city of Machu Picchu in Peru was constructed at an altitude of 6000 feet by people that seemed not to have a written language, or how a Bronze Age culture transported the stones which make up Stonehenge over a distance of hundreds of miles. This list goes on and on: the Colossus of Rhodes, the Coliseum in Rome, Nan Madol in the Pacific. Even something as seemingly mundane as how ancient people constructed swords of Damascus steel is now beyond us.

None of these mysteries seem “immediate” enough to break into our complacent, self-satisfied view of our place at the top of the evolution of technology. They are all so familiar, we fail to comprehend that we don’t actually understand them!

However, on occasion, something is discovered that just makes us sit up and gape in astonishment. Such is the case of the Antikythera Mechanism. (See the picture at the top of this post.) It was discovered in the year 1903, in a Roman shipwreck off a Greek island of the same name. It was viewed as an oddity, given the nature of what remaining details could be seen. Concentric cogs and gears didn’t fit in with our understanding of that time period. Therefore, it was shuttled aside, forgotten until “rediscovered” in the 1970’s, when people started to realize how extraordinary this find was and how we must adjust our way of looking at ancient civilizations.

The following description of the device is from Wikipedia.

The Antikythera mechanism (Greek: O μηχανισμός των Αντικυθήρων transliterated as O mēchanismós tōn Antikythērōn) is an ancient mechanical analog computer (as opposed to most computers today which are digital computers) designed to calculate astronomical positions. It was discovered in the Antikythera wreck off the Greek island of Antikythera, between Kythera and Crete, and has been dated to about 150-100 BC.

The device is remarkable for the level of miniaturization and complexity of its parts, which is comparable to that of 18th century clocks. It has over 30 gears, with teeth formed through equilateral triangles. When past or future dates were entered via a crank (now lost), the mechanism calculated the position of the Sun, Moon or other astronomical information such as the location of other planets. It is possible that the mechanism is based on heliocentric principles, rather than the then-dominant geocentric view espoused by Aristotle and others. The heliocentric view proposed by Aristarchus of Samos (310 BC - c. 230 BC) did not receive widespread recognition, but provides for the possibility of the existence of such a system at this time.

The mechanism has 3 main dials, one on the front, and two on the back. The front dial is marked with the divisions of the Egyptian calendar, or the Sothic year, based on the Sothic cycle. Inside this there is a second dial marked with the Greek signs of the Zodiac. This second dial can be moved to adjust, with respect to the Sothic dial, to compensate for leap years.

The front dial probably carried at least three hands, one showing the date, and two others showing the positions of the Sun and the Moon. The Moon indicator is ingeniously adjusted to show the first anomaly of the Moon's orbit. It is reasonable to suppose the Sun indicator had a similar adjustment, but any gearing for this mechanism (if it existed) has been lost. The front dial also includes a second mechanism with a spherical model of the Moon that displays the Lunar phase.

There is reference in the inscriptions for the planets Mars and Venus, and it would have certainly been within the capabilities of the maker of this mechanism to include gearing to show their positions. There is some speculation that the mechanism may have had indicators for the 5 planets known to the Greeks. None of the gearing, except for one unaccounted gear, for such planetary mechanisms survives.

Finally, the front dial includes a parapegma (a precursor to the modern day Almanac) used to mark the rising and setting of specific stars. Each star is thought to be identified by Greek characters which cross reference details inscribed on the mechanism.

The upper back dial, is in the form of a spiral, with 47 divisions per turn, displaying the 235 months of the 19 year Metonic cycle. This dial contains a smaller subsidiary dial which displays the 76 year Callippic cycle. (There are 4 Metonic cycles within 1 Callippic cycle.) Both of these cycles are important in fixing calendars.

Practical uses of this device may have included the following:
- Astrology was commonly practiced in the ancient world. In order to create an astrological chart, the configuration of the heavens at a particular point of time is needed. It can be very difficult and time-consuming to work this out by hand, and a mechanism such as this would have made an astrologer's work very much easier.
- Calculating solar and lunar eclipses. However, the device would probably only have indicated days when eclipses might occur, and a more accurate calculation of the time of day would have to be done by hand.
- Setting the dates of religious festivals connected with astronomical events.
- Adjusting calendars, which were based on lunar cycles as well as the solar year.

Whatever the purpose of this device, its very existence is a rude slap in our collective faces regarding our “innate superiority” regarding all things technological. Common wisdom told us that machines of this complexity just didn’t exist in the ancient world. How could it be that the Greeks had a machine that rivaled anything that Europe produced in the 1800’s? Someone invented a computer that accurately predicted celestial movements and relationships over 100 years before the birth of Jesus. It boggles the mind, but only when viewed from within the egocentric bubble of our supposed superiority.

I also find it a bit ironic that the marvels of this fascinating bit of ancient technology are being unlocked with the assistance of modern technology, such as X-rays and CT scans.

As interesting as this device is by itself, a fascinating tangential thought is this. Discoveries in technological societies do not exist by themselves. They are almost always built on something that preceded them. The cell phones of today did not just spring out of nowhere. Alexander Graham Bell is first credited with sending recognizable voice patterns over a long distance via electrical signals. The invention of radio showed that these patterns could be sent without the use of a physical medium, such as copper wires. Vacuum tubes evolved into discrete transistors, which then spawned an entire revolution in microelectronics that continues unabated to this day. When these elements are combined, the culmination of all these developments, and others, over the past 100 years just happens to be a portable cellular phone that you can hold in the palm of your hand.

What were the predecessors of the Antikythera Mechanism? Engineers and technicians, not to mention the astronomers and mathematicians necessary to develop the astronomical knowledge behind the Mechanism, did not just develop their skills and knowledge overnight. What other astounding machines did the ancient Greeks have that we do not currently know about? Did this knowledge and technology continue to develop? What other amazing inventions did ancient civilizations produce that are now lost to us?

The irretrievable loss of knowledge is always rather sad to contemplate.
Posted by zeppo at 8:26 PM