The population bottleneck and confidence in the scientific method. 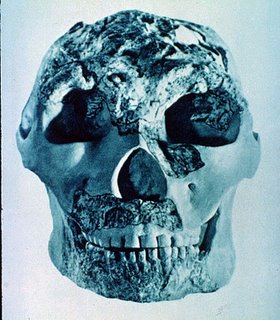 I have been reading some material and watching several shows on the Discovery Channel (I think) about the human population bottleneck. Here is what Wiki says about it first:

A slightly different sort of genetic bottleneck can occur if a small group becomes reproductively separated from the main population. This is called a founder event.

Human mitochondrial DNA (inherited only from one's mother) and Y chromosome DNA (from one's father) show coalescence at around 70,000 years ago. In other words, all living humans' female line ancestry and male line ancestry trace back to a small number of people alive at that time. However, such coalescence is genetically expected and does not indicate a population bottleneck, because most human ancestors are neither female line nor male line ancestors (for example, one's mother's father's ... mother's father). A population bottleneck would only be indicated if DNA coalesced more recently than genetically expected.

In 2000, a Molecular Biology and Evolution paper suggested a transplanting model or a 'long bottleneck' to account for the limited genetic variation, rather than a catastrophic environmental change.

The upshot is this. By examining human DNA taken from numerous examples from around the globe, scientists have concluded that the human population, about 70,000 years ago, almost went extinct. The reasons for this are speculative. However, the dates line up very well with the eruption of the Toba super volcano in Indonesia. Eruptions of that type are suspected of having long term, disastrous effects on climate at the global level.

As interesting as that is to me, that isn’t what I want to talk about here. I would like to address this concept of the population bottleneck. I am astounded that, by examining human DNA, researchers can come to the conclusion that the human population dwindled down to perhaps as few as several thousand people.

First of all, I do not understand what the researchers are actually looking at to make that conclusion. Further, from my understanding, these same researchers have concluded that this small population lived somewhere in the vicinity of eastern Africa, such as modern-day Kenya.

The second point that I do not understand (given that their hypothesis is correct), is how anyone would know what the world’s population of human breeding stock (let’s be honest, that’s what we are talking about) looked like on the OTHER side of the bottleneck. Given that the breeding population, at some point, reached that very low number, how do researchers know that there was ever any significantly greater numbers than that? The concept seems, to me, to be similar to the cosmological Big Bang. By the very nature of the event, all evidence of what the universe was like before the Big Bang has been destroyed. No conclusions about what existed prior to the event can be reached by using the scientific method.

However, this is where my belief in the scientific method comes in. I know, for a fact, that what these scientists and researchers are doing isn’t just a bunch of strung together, unsupported opinions and conjecture. The papers that have been published on this subject have been subjected to rigorous peer review. I know next to nothing about human genetics. However, I am confident that the people doing the research are following the procedures and that their conclusions that they have reached are valid. They are not necessarily “true”, but they have been subjected to rigorous scrutiny and competing theories that would explain the observed results have been evaluated. Therefore, I have no problem in accepting this hypothesis, even though this is nowhere near my area of expertise. I think this is a fascinating area of inquiry. It says that the human race may be very, very fortunate to be here at the present time.

This is why I think what the Fundamentalist Christians are doing with regard to raising suspicions about any scientific conclusion they don’t like is so damaging. When flagrantly dismissing very well founded scientific theories such as evolution, the age of the earth, the age of dinosaurs, and global warming, they are stating that opinion is more important than conclusions reached by the scientific method. If someone comes up with theory that has been arrived at with meticulous methods by trained scientists specializing in that field, you are free to discount it if that theory conflicts with your own prejudices and pre-formed opinion. We now have a very large percentage of the population in this country that has no idea how the scientific method works and seems to equate it to astrology.

If we accept this position, then we are opening up ALL current knowledge to being overridden. We would “know” nothing, and all disputes between opposing parties would be relegated to seeing who can shout the loudest. You cannot be that selective, where you accept scientific findings for something you agree with, but condemn other scientific findings that you don’t agree with that were reached by the very same methodology!

Aside from all the other hazards that this country faces at this time, we are in grave danger of becoming a laughing stock in the world. We will be passed up by the less-opinionated technological societies of India, China, Japan, and countless others. We will be unable to learn and progress, as we will never want to learn anything new.

This, to me, is the current face of the extreme right-wing fundamentalists. It appears to me that they would like us to go back to the Dark Ages.
Posted by zeppo at 1:40 PM