THIS PHOTO HAS BEEN FAKED BY PRO-WAR CONSERVATIVES!! 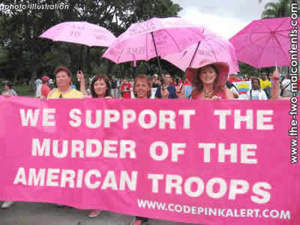 I originally wasn’t going to post this fake picture, I found it so disgusting. However, I decided that it is an attention getter, if anyone is out there still checking out this blog, and it also demonstrates perfectly the perfidy at work these days in the true-believer pro-war , pro-Bush conservatives of this country.

You can click on this link to go see the entire post at Sadly, No!, which is where I got this photo.

Here is the basic setup. There was an anti-war march in Washington D.C. recently. Lots of people were there, representing many groups, one of which is called Code Pink, a group of anti-war lesbians. Boy, if that isn’t enough to get the right’s collective knickers in a bunch, I don’t know what is. Lesbians AND anti-war! Mustn’t let that go unchallenged!

So, at the website of an obnoxious pro-war group called a Gathering of Eagles (this is the same group whose members just beat up the father of a young soldier who had been killed in Iraq or Afghanistan, because he was using his son’s picture during his protest). On their website, they had posted (which has since been removed without explanation) a photoshopped picture of a group of Code Pink ladies with pink umbrellas and holding a big pink sign that says, in this photo, “We Support The Murder Of The American Troops!” And, of course, this got picked up by lots of conservative, pro-war bloggers and the right wingers went nuts. The outrage, according to the post at Sadly, No!, went on even after the photo had been shown to be faked.

I just cannot believe several things about this whole incident. The first is, of course, that anyone would stoop this low in order to try to manufacture outrage at their “enemies”. They can’t even come up with a coherent, convincing rational for their own position on the war, so they feel they have no alternative but to try to make their opponents into unfeeling monsters that are actively advocating murder of Americans. That established, they can then beat their collective chests with self-righteous anger about how inhuman the anti-war people are. They get to avoid the illogic of their own position, since they are so focused on someone else’s, even though it turns out to be totally without merit.

The dishonesty behind this action is absolutely breathtaking. I wouldn’t expect that kind of action out of a vindictive 10 year old. Well, maybe, but I would certainly hope for better. Adults, no. Adults should not act like this.

The second thing that amazes me is how many people actually believed this photo was the real thing. All these people desperately wanted to believe this photo was legit, as it would validate all their hatred at anti-war groups and lesbians, so much so that they didn’t even stop to ask some questions that would immediately come to mind in any sort of self-aware primate. For instance, aren’t anti-war people the ones who want our troops to come home SO THEY WON’T GET SHOT AT, BLOWN UP AND KILLED? Isn’t that kind of the point of being against the war? Who, in their right mind, would openly advocated the murder of our brave troops? That’s beyond insane. Isn’t “wanting our troops out of harm’s way” and “murdering our troops” rather at odds with each other?

However, logic is not something that is driving the political discourse on the extreme right these days. No, these nuts are searching for something, anything that will validate their own beliefs, no matter how ridiculous. So, they grab onto this kind of insanity. When this fraud was exposed, at least one conservative blogger, Rick Moran, kept a firm grasp on his conviction that Code Pink really does hold those feelings toward our troops, even if the photo happened to be a fake.

Again, from Sadly, No!, I give you Rick Moran:

Then again, what does it say about Code Pink that I saw no reason why they couldn’t have marched down the street with such a sign? Seemed real to me as I’m sure it did to many readers.

These people are beyond disgusting.
Posted by zeppo at 4:30 PM