Truths I have come to believe, as told by 1940’s and 50’s science fiction films. 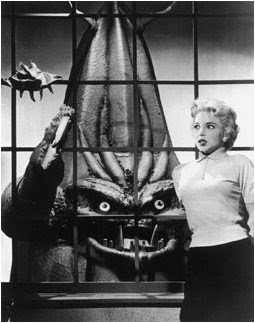 Having become somewhat of an authority on the subject of classic science fiction films, the good, the bad, and the truly terrible, I thought I might try to summarize what I see as truisms that are consistently made when watching these wonderfully kitschy sci-fi films.

1. Spaceships:
a. Will only move through space while the rockets are blasting away. If the rockets stop working, then the spaceship stops dead in space, thus demonstrating the highly overrated nature of that scientific principle, inertia. (Rocketship X-M, Manhunt in Space, Angry Red Planet)
b. Will be encounter a dangerous meteor shower every single trip into space. (First Spaceship on Venus, Rocketship X-M, This Island Earth, Missile to the Moon, Flight to Mars, Twelve to the Moon, Destination: Moon, Space Probe Taurus.)
c. Will feel the effects of zero gravity while in outer space only once during a trip into space, usually at the beginning of the trip, to great comic effect. There will be no further evidence of weightlessness after that. (Rocketship X-M, First Spaceship on Venus)

2. Aliens from outer space:
a. Are often really gorgeous women who wear either mini-skirts or leotards. They either strongly desire to do a man’s every bidding, or make men into slaves. (Fire Maidens from Outer Space, Devil Girl from Mars, World Without End, Cat Women from the Moon, Queen of Outer Space, Phantom Planet, Missile to the Moon, Flight to Mars)
b. Being intent on the conquest of Earth, will always pick the most out of the way, desolate place on the face of planet from which to launch their conquest. (The Beast with a Million Eyes, Robot Monster, The Brain from Planet Arous)
c. Must always be shot at or blown up, even though the alien has done absolutely nothing harmful or threatening to any Earthmen. This is just because they are aliens. (The Day the Earth Stood Still, Space Probe Taurus, Phantom from Space, The Cosmic Man)

3. For a scientific expedition to really run smoothly:
a. It must have someone along that will provide comic relief. (The Lost Continent, Angry Red Planet, The Atomic Submarine, Rocketship X-M, Forbidden Planet). If no wisecracking human is available for this task, robots may be used. (Forbidden Planet, First Spaceship on Venus, Planet of Storms)
b. It must have at least one woman along who, regardless of her academic qualifications, is required to serve coffee to the men and clean up their dirty dishes (It! The Terror Beyond Space, The Thing from Another Planet, Angry Red Planet, Radar Men from the Moon) NOTE: This requirement is invalidated if number 2 is applicable.

4. Radiation:
a. Causes small things to grow really big. (The Amazing Colossal Man, The Monster that Challenged the World, The Beginning of the End, Them!, Attack of the Crab Monsters)
b. Except spiders, which get big for other reasons. (Tarantula!, Earth vs. the Spider, The Horror of Spider Island)
c. Except, sometimes, radiation makes people really small. (The Incredible Shrinking Man, Dr. Cyclops, Attack of the Puppet People)
d. Except, sometimes, radiation just mutates people while keeping them the same size. (The Hideous Sun Demon, Hand of Death)

5. Scientists who work by themselves are either blinded by science and can no longer tell right from wrong, or are up to no good in the first place and they know it. Either way, they are not to be trusted. (Forbidden Planet, Hand of Death, It Conquered the World, The Atomic Brain, The Fly, The 4-D Man, Mesa of Lost Women, She Demons, Blood Creature, Terror from the Year 5000, The Colossus of New York, Dr. Cyclops, Wasp Woman, The Invisible Boy, Donovan’s Brain, The Hideous Sun Demon, Wild, Wild Planet) This is especially true if the scientist is not an American. (The Manster, The Flesh Eaters, The Killer Shrews, Tarantula!) Karmic retribution is normally handed out to these scientists at the end of the film.
a. The exception to this rule is the lone scientist who sees the obvious danger and tries to warn everyone of the danger confronting the world in the face of overwhelming skepticism. (Them!, The Giant Behemoth, The Beast from 20 Thousand Fathoms, It Came from Outer Space, The Giant Claw, The Invasion of the Body Snatchers, Island of the Burning Doomed, X, the Unknown)
b. Sometimes, these lone scientists also invent a “leap of technology” weapon which can be used to save the world. (Earth vs. the Flying Saucers, The Giant Claw, Invisible Invaders, Target Earth, Beginning of the End)

6. Military men are gods who know everything and really can do no wrong. (It Came from Beneath the Sea, The Deadly Mantis, Reptilicus)
a. This is especially true when in conflict with the blinded scientist of number 5. (The Thing from Another World)
b. They can be authoritarian, rude, sexist pigs who eventually show their soft, caring side, at which point, a beautiful lady will overlook his obvious faults and fall madly in love with him. (20 Million Miles to Earth, Forbidden Planet, The Monster that Challenged the World, The Fiend Without a Face, It Came from Beneath the Sea)
c. If stationed in a foreign country, military men look upon the local inhabitants as backwards and ignorant and expect the locals and local authorities to bow to the wishes of the U.S. military, even in very industrialized, civilized countries like Canada (Fiend Without a Face), Italy (20 Million Miles to Earth), Denmark (Reptilicus) and Japan (Varan, the Incredible).
d. Military men feel like they can set off an atomic bomb pretty much anywhere they want to, at any time, for very unclear reasons. But, in the 1950’s, this is seen as acceptable behavior. (The Beast from 20,000 Fathoms, The Deadly Mantis, Rodan, Killers from Space)

7. If there is a volcano nearby, it will explode. (One Million Years B.C., Mysterious Island, The Land that Time Forgot, The Black Scorpion)

8. The universe treats people who aren’t intelligent, adult, good looking white males who are in the military in the following manner:
a. Pretty island native girls/women get killed. Caucasian women on a tropical island, surrounded by the natives, usually don’t. (Blood Creature, She Demons, From Hell It Came)
b. Dumb, drunk or oblivious white guys get killed, most deservedly so, because of their dumb, drunk or oblivious actions. (War of the Worlds, Target Earth).
c. Heroic white guys do occasionally get killed, but always in the pursuit of a noble cause. (Them!, The First Man Into Space)
d. Attractive female scientists hardly ever get killed. (The Beast from 20,000 Fathoms, It Came From Beneath the Sea, Tarantula!, When Worlds Collide, This Island Earth, Kronos, Earth vs. the Flying Saucers, The Thing from Another World, Angry Red Planet, First Spaceship on Venus, The Creature from the Black Lagoon, Revenge of the Creature, Robot Monster) On the other hand, attractive female lab assistants sometimes do get killed (It Conquered the World). Only when everyone else dies, does the attractive female scientist die. (Rocketship X-M)
e. Teenagers understand more than most adults and can be counted upon to save the day. (The Blob, Teenagers from Outer Space, The Giant Gila Monster, Invasion of the Saucer Men, Earth vs. the Spider, Teenage Caveman)
f. Annoying little kids are everywhere and will do the stupidest thing possible at the worst possible moment. Still, they always survive and everyone loves them. (The Black Scorpion, 20 Million Miles to Earth, Valley of Gwangi, Tobor, the Great, The Invisible Boy)
Posted by zeppo at 4:33 PM