Flying with commercial U.S. carriers has become a nightmare. 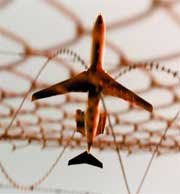 This is not exactly news. Every day, if we were to look long enough, there are stories in the press about how terrible things have become. This latest example is in the Washington Post. The number of mishandled bags by the major airlines has increased steadily over the last four or five years. Of course, the response by the airlines is to blame someone else.

I have gotten to the point that I am going to refuse to go on any business trips that I cannot absolutely get out of. I just don’t dislike traveling by air. I detest it. It has gotten to the point of dread. It is physically and emotionally draining.

I took exactly two business trips this summer, both to points in the domestic United States. In those two trips, I have experienced the following:

- I spent three and a half hours sitting in a fully packed sweltering airplane on the tarmac at Dallas, waiting to take off for Atlanta. During this delay, there was no food and very little lukewarm water. The ice had disappeared long earlier. Even when the airplane was finally ready to leave, the flight attendants were still charging $3.50 for package of chips, instead of giving them away for free at the end of a long and uncomfortable wait.

- I have watched physical confrontations between a passenger and a flight attendant, and between two passengers. The first of these incidents ended in the passenger in question being take off the airplane at the destination by federal agents. The second of these incidents resulted in the flight attendant telling the passengers in question that they needed to calm down but they had to work out their problems by themselves. In other words, she was not going to get involved. Tempers are on edge and people believe that, by paying for an airline ticket, they are free to act like complete a**holes.

- I ended up with two tickets for the same trip. To make matters worse, American Airlines decided that I had used segments of both tickets, making a simple refund for an unused ticket out of the question. I was refused boarding on the second leg of the journey and was made to go back and get another boarding pass, even though the one I held was still valid. This resulted in me having a middle seat, after I had specifically gone to the trouble of booking the flight two months in advance just so I could have an aisle seat.

- American Airlines has absolutely no one, no one at all, that a person can talk with when dealing with billing issues. Everything must be done via e-mail. There are no hidden automatic telephone menus to push. There are no unpublished telephone numbers that anyone will give you, even if you badger them. Everything results in you being shuttled back to the same automated telephone menu and the same internet web address that you have already tried. What should have taken 20 minutes to fix took over two months and several hours on e-mail and the phone. In the end, when AAL finally did address my problem and give me a refund, they didn’t even notify me that this was done. I had to find out via my credit card company.

- Every single leg of every single flight was 100% full, with what seems to be ever decreasing amounts of legroom. United Airlines has now started charging extra for three or four extra inches of legroom. “Enhanced seating”, I think it is euphemistically called. I paid for the option on several legs, even though I was incensed by the thought of it,. I am a rather tall person and trying to fit into a “normal” airliner seat is almost out of the question. I just happen to be of the opinion that physical comfort should be part of the basic package, not something that you are required to pay extra for. If the person in front of me reclines their seat, my knees are trapped in the seatback for the rest of the flight. I cannot even reach my bag underneath the seat in front of me, much less put my table tray down or use a laptop computer.

I roll my eyes when I hear how wonderful and “passenger friendly” the new Airbus A380 and Boeing 787 are going to be. Well, I doubt that. There may be some new features on each that don’t exist on the airplanes flying today, such as larger windows and a greater percentage of fresh air. However, the airlines are going to continue with their trend of maximizing the number of seats in each airplane. The more passengers they fly on each flight, the more money they make, after all. The Boeing 787, to my understanding, was originally intended to have eight seats across (in coach). The seats were going to be several inches wider than the standard seats on today’s airplane. Of course, the airlines were not content with that. They each insisted on nine seats across, which results in the coach seats on the 787 being narrower than the airplanes flying today, even other Boeing airplanes such as the 737.

I don’t know another industry that seems to care so little for their actual customers. All they seem to be trying to do is to milk their customers for as much money as possible, while cutting as much customer services as they can, as they see that as “unacceptable overhead”. All the airlines care about maximizing their very small profit margin. They assume that, no matter how badly they treat the flying public, their customers have no other option, given that all the major airlines approach customers with the same distain, and will continue to fly in the future.

Not I. Unless it is absolutely forced upon me, I am not going to get on another airplane. Now, the circumstances which might “force” me are still undefined. If my family really, really desires to go on a Southern California theme park vacation, then I don’t have a lot of options. Nor do I have any options if I would like to go back to Hawaii. And there are going to be some business trips that I just cannot realistically avoid.

That is certainly not a glowing endorsement of the air travel industry. If I were the major airlines, I would be very careful about how much more distain you heap upon your paying customers.
Posted by zeppo at 7:55 AM