“Monsters, John. Monsters from the Id!” 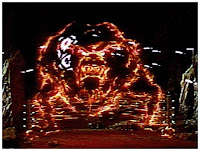 Warning: Contains spoilers for those few of you who that haven’t seen “Forbidden Planet” but would still like to one of these days without knowing the ending.

“Forbidden Planet” is one of my favorite classic science fiction films. I think it is much more meaningful than another classic from the same time frame, “The Day the Earth Stood Still”, for several reasons. The primary reason I think it is a superior film is related to the message contained in the film. For those who aren’t fans of classic sci-fi, “Forbidden Planet” is loosely based on Shakespeare’s “The Tempest”. The kicker in both is that the malevolent entity in each is based on the wishes of the main protagonists; Prospero in “The Tempest” and Dr. Morbius in “Forbidden Planet”. In the case of Dr. Morbius, a scientific explanation is given. The extraordinary machinery left behind by a dead civilization amplifies the subconscious, the id, of Dr. Morbius to the point that an invisible monster goes out and murders people who go against his wishes. Hence, the Monster from the Id is the dark side of Dr. Morbius himself.

Now, the reason I bring this up is not just to discuss one of my favorite films. I think the parable contained in this film regarding the damage that people can do to one another because of a person’s submerged personality is very relevant to today’s society. In other words, I am thinking that our society in the United States today is very much like the Krell of “Forbidden Planet”. We have created a vast, technological based civilization that is on the verge of getting out of our control. It sometimes seems as if technology must continue to change and advance for its own sake, and not because of any benefits that it may provide to individuals. Our subconscious wishes and desires are finding an outlet in the technology of today. In our case, the technology is the access to vast amounts of information and the ability, with the maturation of the internet, to give individuals a platform by which they can disseminate the information they desire.

Technology, by itself, is neutral. It is neither good nor bad. It just is. It is what people do with this technology and how it affects us as individuals and as groups that is important. It is not clear in my mind that the benefits of this almost unlimited exchange of information and ideas outweighs the harmful effects. Now, I am in no way advocating the restriction of information flow. That is the way to domination of many by a small group. One of the first things that occurs in a country that is run by a authoritarian government is that the government seizes all the newspapers, radio and television stations. What I am saying is that I don’t think we, as a society, have figured out how to counteract the ill effects of this technological beast that we have created.

I cannot help but think of people like Rush Limbaugh, Bill O’Reilly, Michelle Malkin, Ann Coulter, at the rest of their ilk, as a manifestation of the subconscious id of this country. Their rants, which are given wide circulation because of the money they make for their masters, play directly to the baser instincts of many segments in our population. Racism, bigotry, intolerance, whatever you want, you can probably find it somewhere in the mainstream press now. It used to be that such talk was limited in scope. Now, because of the depth and breadth of the availability of information of all kinds, it appears that ideas that used to be somewhat shameful and not spoken directly are now considered to be “mainstream”. For any idea you care to advance, you can now find a forum. When these ideas are taken up in the national media, then immediately, that idea, however farfetched it may have been in the past, is now just part of the national dialog; one valid viewpoint among many. This cycle contains an element of self-actualization. Information repeated often enough becomes valid, and then it becomes “conventional wisdom”.

This is where Monsters from the Id come about. The monsters live in all of us. For most of us, we can successfully recognize these monsters within ourselves exist and deal with them accordingly. However, a large percentage of our population seems to revel in these monsters. Racism, in the guise of anti-immigration is just one example. Take the following passage from an article in the HuffingtonPost.

Before the massive May 1, 2006, "A Day Without Immigrants" protests, Iowa Representative Steve King (R) declared:

"What would that May 1st look like without illegal immigration? There would be no one to smuggle across our southern border the heroin, marijuana, cocaine, and methamphetamines that plague the United States, reducing the U.S. supply of meth that day by 80%. The lives of 12 U.S. citizens would be saved who otherwise die a violent death at the hands of murderous illegal aliens each day. Another 13 Americans would survive who are otherwise killed each day by uninsured drunk driving illegals. Our hospital emergency rooms would not be flooded with everything from gunshot wounds, to anchor babies, to imported diseases to hangnails, giving American citizens the day off from standing in line behind illegals. Eight American children would not suffer the horror as a victim of a sex crime."

"When we yank out the welcome mat, and they all start going back to Mexico, as a going away gift let's all give them a box of nuclear waste.... Tell 'em it'll heat tortillas."


I have a hard time believing that an elected state official would have said something like that back in the 1980’s. Likewise, I am not certain when it became acceptable to say something like Neal Boortz is quoted as saying above. Both statements certainly seem to be a manifestation of the right’s bigotry and hatred of anyone who doesn’t look, act and sound just like them. Are they aware of how stupid and racist their statements make them look? I actually rather doubt it. Just like Dr. Morbius, they are unaware of the underlying issues that are driving to make such statements. Unfortunately, just like Dr. Morbius, they also have access to technology that amplifies their hatred and blasts it out onto a society, many segments of which would rather not acknowledge that such hatred exists in our society.

Monsters from the Id, indeed. We have not found a way to deal with them and, just like the Krell, they may ultimately be our downfall.
Posted by zeppo at 3:10 PM