This story still resonates here in Washington state. People still die in avalanches in the Cascade mountains. However, almost 100 years ago, the worst loss of life in the United States took place near Wellington, Washington in Stevens Pass. The Great Northern railroad (later Burlington Northern, later Burlington Northern Santa Fe) relocated the tracks through the Cascade mountains near the summit, boring a new and longer, yet much safer tunnel. It is still in use today.

You can still hike the old railroad grade, now known as the Iron Goat trail. There are still remnants of the wrecks littering the canyon bottom. Photos of the ancient yet still grim aftermath can be seen in Ross Fotheringham’s web page (link over at the right side). The last time I went hiking on the trail, before the new trailhead was opened, I came across a number of old railroad implements, like a cup, an axe, some other things I don’t remember. Someone had laid them out in a row, almost like a memorial. Even at this far removed time from the actual disaster, no one had disturbed this little tableau of sad reminders of the dead.

Here are some pictures and excerpts from the story in the Everett Herald. 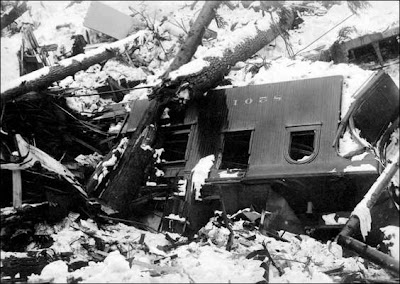 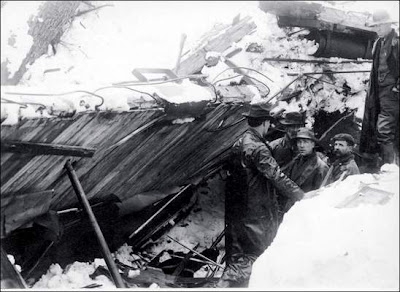 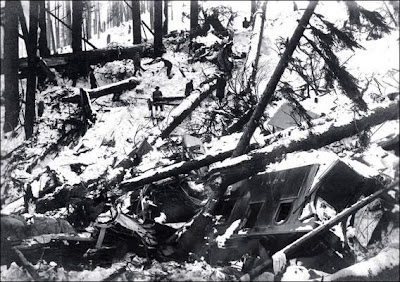 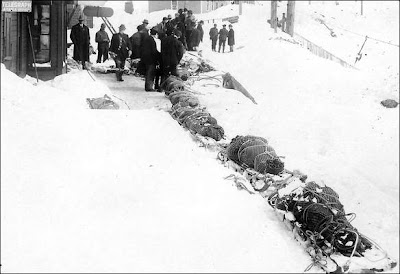 Photo Courtesy of the Everett Public Library Juleen Collection An avalanche in Wellington swept two trains and a yard full of railroad equipment down into a creek bed. On the night of March 1, 1910, two Great Northern trains (passenger train local #25 and fast mail train #27) were buried in an avalanche near the town of Wellington, Washington, situated in the Cascade Mountains. An amateur photographer at the time, John Juleen took the earliest photos of the aftermath.

Those who knew Stockwell say he became forever taciturn. Like others who made the trip, he reluctantly spoke of the horrors he witnessed: the bodies torn to pieces by tremendous force, the blood-stained snow, of cold days marked by a slow parade of the dead.

The ghosts of what transformed Stockwell still linger at Stevens Pass. The hissing of sliding snow, the distant snapping of tree limbs, the whisper of the past.

On March 1, 1910, the deadliest avalanche in the United States' history swept away nearly 100 lives in the small railroad town of Wellington on the west side of the pass.

The carnage was so horrendous that people of the day renamed the town Tye.